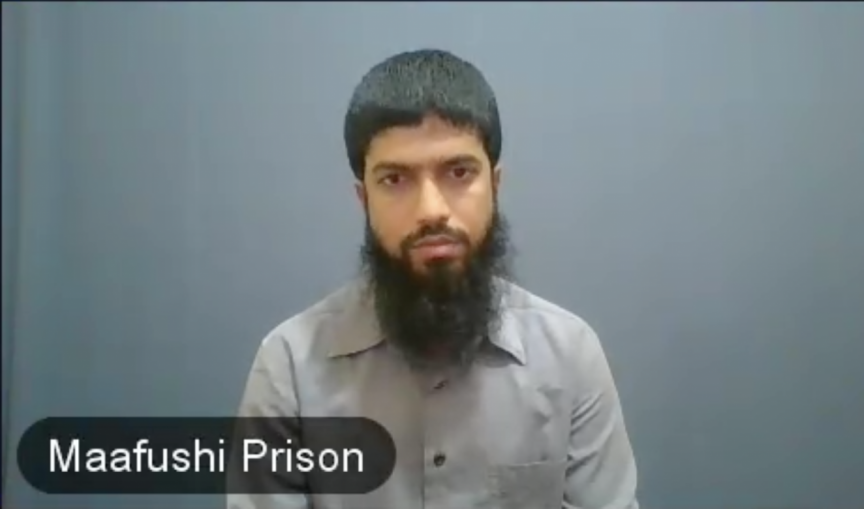 The Criminal Court has extended the detention of Moosa Inaaz, who is accused of lighting a fire on a police speedboat harbored in L. Gan.

Inaaz was accused of committing an act of terrorism. He was previously charged with the Sultan Park bombings in the capital Male’ City.

The state, in today’s hearing, said that Inaaz could tamper with evidence and that he was accused of a major offense, before requesting to extend his detention due to the risk he posed to society.

Inaaz, submitted complaints regarding his detention in today’s hearing. He said that he was an arthritis patient since 16 years of age. Inaaz said that his health condition in prison had deteriorated and was suffering from joint pains due to the hard cot he was provided to sleep.

Inaaz also argued that his health and medication were not prioritized in prison and that there was insufficient natural light in his cell. Inaaz requested for a mattress to sleep on and to arrange his treatment for his medical issues before requesting to be released from prison.

The state countered by saying that Inaaz had not made any such complaints before and that he may attempt to tamper with 27 witnesses who were willing to testify against him. Defense lawyers argued that there was no way Inaaz could possibly influence 27 individuals.

Judge Sofwath Habeeb, after hearing the cases, stated that there was no evident reason for the release of Inaaz and that preliminary hearings in the case would be scheduled next month.

The police speedboat lit on fire is registered as “34”. No one harmed in the incident and the Commissioner of Police Mohamed Hameed stated that the fire was an act of revenge against an investigation related to drugs.

Trafficker walks free due to discrepancies in evidence

Man sentenced to 10 years in prison for stabbing