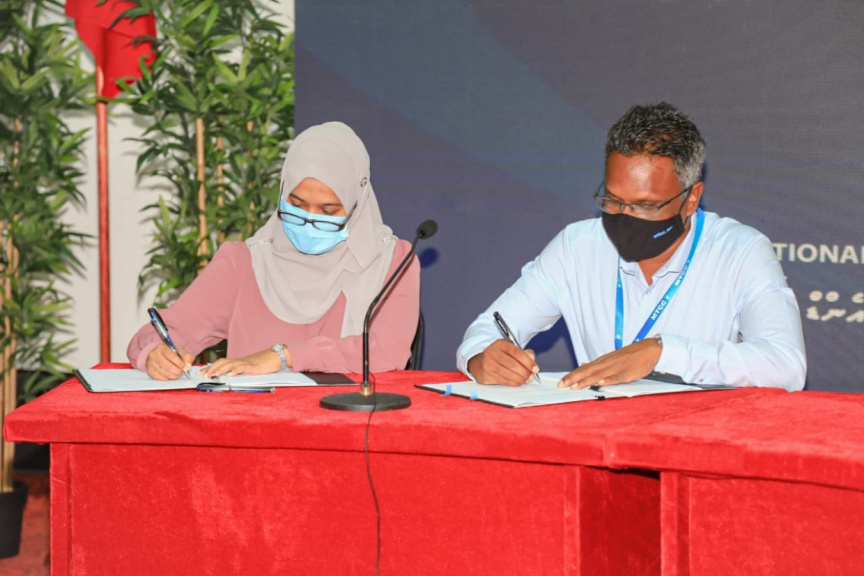 Framwork agreement for a high-speed ferry network was signed by Managing Director of MTCC Adam Azim and Director General of the Planning Ministry Fathimath Shaana in a ceremony on January 16, 2020. (Photo/Planning Ministry)

The framework agreement for a high-speed ferry network as part of the first phase of the Integrated National Public Ferry Network project has been signed between the Ministry of National Planning, Housing and Infrastructure, and Maldives Transport and Contracting Company (MTCC).

The agreement was signed by the Managing Director of MTCC Adam Azim and Director General of the Ministry Fathimath Shaana in a ceremony today.

The purpose of the ferry network is to connect the dispersed population of the Maldives through an affordable safe and efficient transport network.

Managing Director Azim said that his company was prepared to perfect the ferry system.

The network will classify three regions and six zones and would provide two separate networks for passenger transit and movement cargo ferries within and in between the regions, effectively linking maritime transport with land and air transport.

Azim added that the agreement today was the framework agreement for the ferry system, and a service agreement would be signed later on.

“It is for zone 1. To provide services for 41 islands. And so, 41 islands in the H. A. Atoll, H. Dh. Atoll, Sh. Atoll, these three atolls would be provided with services.” Said Azim.

Azim said that it would be difficult to provide services seven days per week but would be carried out for the convenience of the public earnestly by the company.

The Planning Ministry mandates providing services on each day of the week and a prepared contingency plan in case of service disruption. In major population centers, services are to be provided twice a day. Islands with airports and hospitals are also to be operated to every day.

Azim said that 47 feet speedboats which can carry 40-50 people would be utilized for the operations. 14 speedboats would be used per day with three more ready in case of service disruption. The services would also be made easier for people with disabilities.

“For sure, when the ferry network is established, citizens would gain a lot of conveniences.” Said Azim.

The project is to commence by September and Azim said that despite the short period, the company was working to start operations by then. He added that money would not be an issue but challenges could come in the supply of engines.

The network aims to facilitate inclusive regional development by connecting people and services, accelerate social and economic growth, improve efficiency in the delivery of public services and improve mobility and accessibility for all citizens in all areas of the nation.

Under the plan, the ferry network would connect islands within the areas and between areas via three types of links; commute links, non-commute links, and highway links.

Garage letter a ‘scam’, but govt. MPs against repeal

A week for minibus: Taxi drivers report drop in income