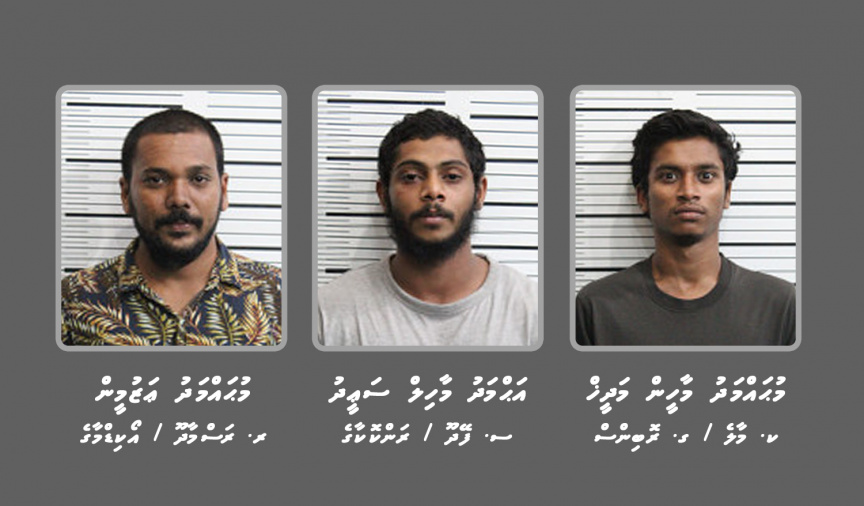 Maldives Police Service, on Sunday, released the identities of three suspects they believe to have served as accomplices in the attempt to steal over MVR 4.2 million in cash transported for deposit by local tobacco distributor Root to Bank of Ceylon (BOC) in Male’ in October.

The robbery attempt had taken place at approximately 11:40 am on October 25. The robbers – four men wearing masks and helmets - came on two motorcycles and closed in on the van transporting the money as it parked in front of the bank. The robbery was foiled with the quick intervention of a security guard and Root’s staffers involved in the transport of the money.

The police have made seven arrests in connection to the case.

The police believe the three suspects, whose identities they released this Sunday, assisted the four robbers who actively carried out the crime, planned the robbery, and were actively involved in the commission of the crime.

The police have also arrested four suspects they believe are the four masked men caught on CCTV carrying out the crime. They are:

The police have previously stated that the four suspects have prior records for theft, armed robbery, assault, and drug offenses.

All seven suspects arrested in connection to the case were remanded in custody of the police in a facility determined by the Home Ministry for 15 days when presented before the Criminal Court for their remand hearings.

The money, packed in a cardboard box, was transported to the bank on a van. CCTV footage shows four men wearing dark clothing, masks and helmets, close in on the as it parks in front of the bank, before attacking staffers from Root and attempting to snatch the cardboard box.

Root has rewarded the security guard who intervened to foil the robbery with MVR 50,000, and three of their staffers with MVR 10,000. The security guard has also been presented with a plaque of appreciation by the police.

The case remains under further investigation by the Serious and Organized Crime Department.