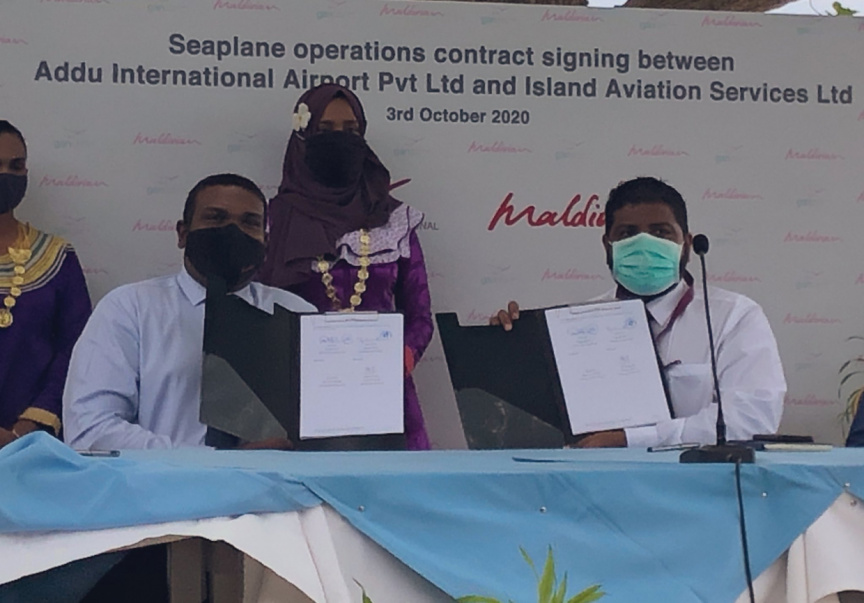 Speaking during the ceremony, Mausoom and Fayyaz said Island Aviation itself understands that it the seaplane operations will not be profitable in the short-run, but that it is a risk work taking to fulfill the government’s development goals for Maldives, especially southern Maldives.

Mausoom said that the current number of tourist beds in southern Maldives is not viable for commercial operations, and must be increased.

“There are approximately 2,400 beds in the region [not open at present]. This is not a viable number for flight operations. This region needs at least 6,000 beds to facilitate flight operations,” he said.

“The year 2022 needs to be a remarkable year. It’s also the 50th anniversary to commencement of tourism. Under the contract signed today to launch a seaplane hub, the year 2022 will be a year of additional initiatives and additional flight operations, making tourism in this region commercially viable.”

Meanwhile, Fayyaz said that the decision to launch seaplane operations in southern Maldives is a risky move, and may not profitable in the short-run.

“They [Island Aviation and Addu International Airport] have taken a great business risk. There is no great certainty this will be profitable in the coming months, or even years. But without someone to take this risk, we cannot bring the desired economic progress to the nation, and especially, progress to the south,” he said.

“I have no doubt Island Aviation will generate profits from this in the coming years. But it will need to incur losses in the short-run. But overall, what we witnessed today is the beginning of something absolutely crucial for the success of Addu International Airport, and the success of tourism industry in Huvadhoo, Fuvahmulah and Addu.”

Mayor Sodiq too, noted the low tourist beds in Addu, resulting in low profits for airlines that operate to Addu. He said that connecting southern atolls may provide a solution to the issue.

“It has been far too long that we have been operating under the signboard of international airport. SriLankan has been bravely flying here. Even when it had held regular operations, prior to halting operations due to the pandemic, SriLankan last noted that they were barely managing to hold two three flights per week. That it cannot hold any additional flights unless there is a domestic link, to some place other than Addu,” he said.

While the contract to launch seaplane operations in southern Maldives has been signed, Fayyaz said Island Aviation needs to make certain preparations such as renovation of the seaplane terminal in Gan International Airport, and that it will therefore take approximately 45 days to launch the operations.

“I want to assure potential investors, international parties, airlines, and resorts in Huvadhoo that this [seaplane operations] has begun. In Sha Allah, there’s no doubt that daily operations between Huvadhoo and Addu will begin in a matter of one-and-a-half months,” he said.