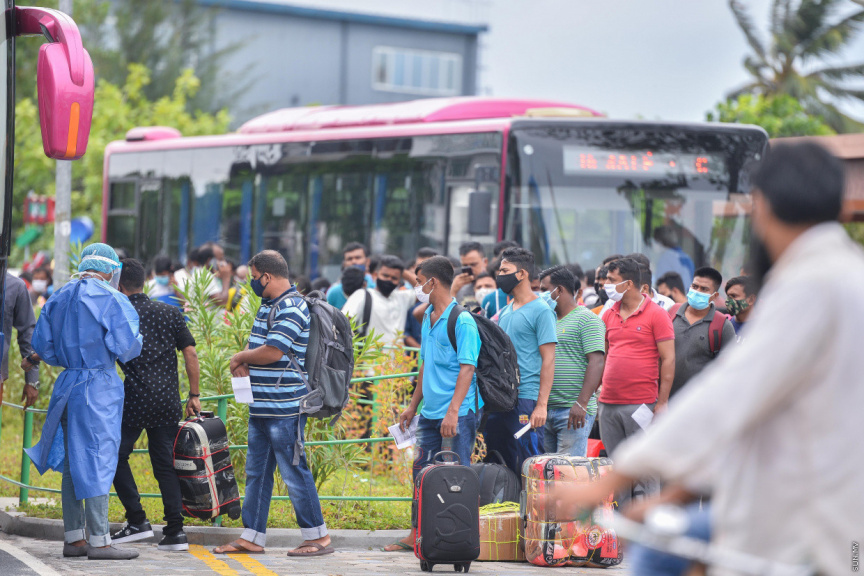 Migrant workers wait for a bus to take them to the airport for repatriation. (File Photo/Sun/Fayaz Moosa)

The Economic Ministry has publicized a list of expatriates wishing to return home to ensure that they are in the Maldives under valid employment approvals. The Ministry formulated the list as part of the repatriation efforts of the government.

In an announcement, the Ministry said that applications for the voluntary repatriation program of the government in collaboration with the Bangladeshi government were being received by expatriates in the Maldives under valid employment approvals. The repatriation program is aimed at undocumented expatriates in the Maldives who voluntarily wishes to return back home.

The Ministry said that even though these expatriates had proper documentation, they were not working for the parties who obtained the approvals in the first place.

A list of expatriates were issued by the Ministry which read that the list included individuals with proper documents who were not working for the parties that obtained the approval in the first place and had requested to be repatriated under the Ministry’s repatriation program.

The Ministry requested that if anyone on that list were working for the employers who obtained the approval, to email the ministry [email protected] stating so before 14:00, September 15, 2020.

Information pertaining to the expatriate such as their full name, passport number as well as the information related to the employer must also be sent to the Ministry along with the email.

So far, the government has facilitated the repatriation of more than 6,000 Bangladeshi expatriates. Economic Minister Fayyaz Ismail has previously said that the government was targeting to repatriate around 20,000 undocumented expatriates by the end of 2020.

'ADB has not halted single window project, no graft'