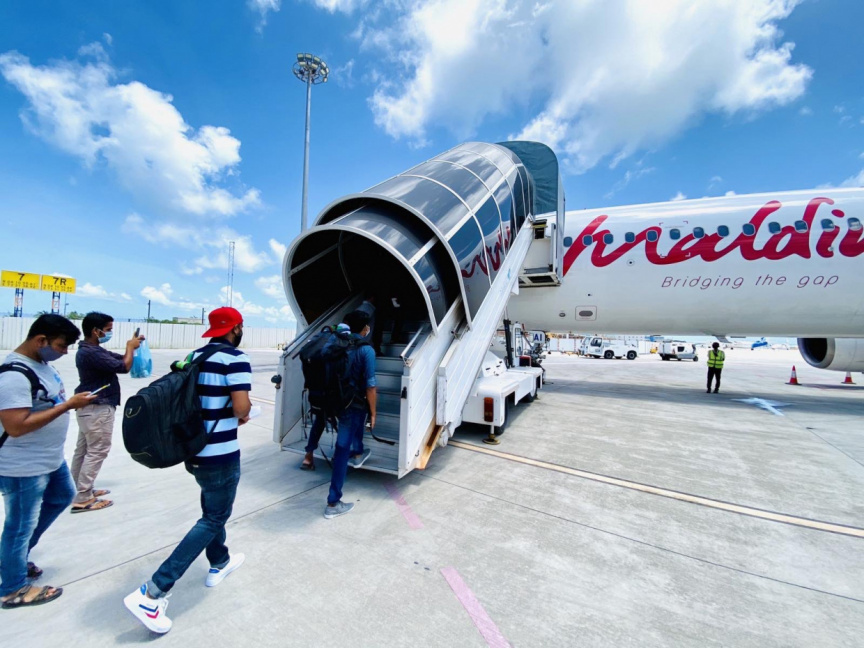 Bangladeshi workers board a repatriation flight to Dhaka on August 24, 2020. (Photo/Maldivian)

199 Bangladeshi workers have been repatriated to Dhaka on Monday, under the voluntary repatriation program run by the Maldivian Government.

The 199 Bangladeshi workers left for Dhaka on Monday afternoon, on the 32nd repatriation held by the national airline, Maldivian, to Bangladesh.

Maldivian Airlines has facilitated the repatriation of 6,132 Bangladeshi workers under the program, many of whom were undocumented.

Economic Minister Fayyaz Ismail stated in early August that Bangladeshi workers are repatriated after checking their police records, and after obtaining necessary papers from the Bangladesh High Commission in Male’.

He also stated that the repatriations are voluntary, and that the program is run in collaboration with the Bangladeshi government.

“The hope is that, if the COVID situation improves, we repatriate 20,000 people by the end of this year. That’s the target. It may not happen. But we are working hard to reach this target,” he said.

Maldives has a population of close to 150,000 migrant workers. Fayyaz stated in July that while Maldives Immigration’s records place the number of undocumented migrant workers in the country at 62,000 – the actual figure is believed to be within the range of 80,000 to 100,000.

Maldives Immigration has initiated a program to facilitate the repatriation of migrant workers with expired work visa or employment approval who wish to return to their home countries.

The program will remain open until the end of this year.

3,249 people penalized for violation of curfew