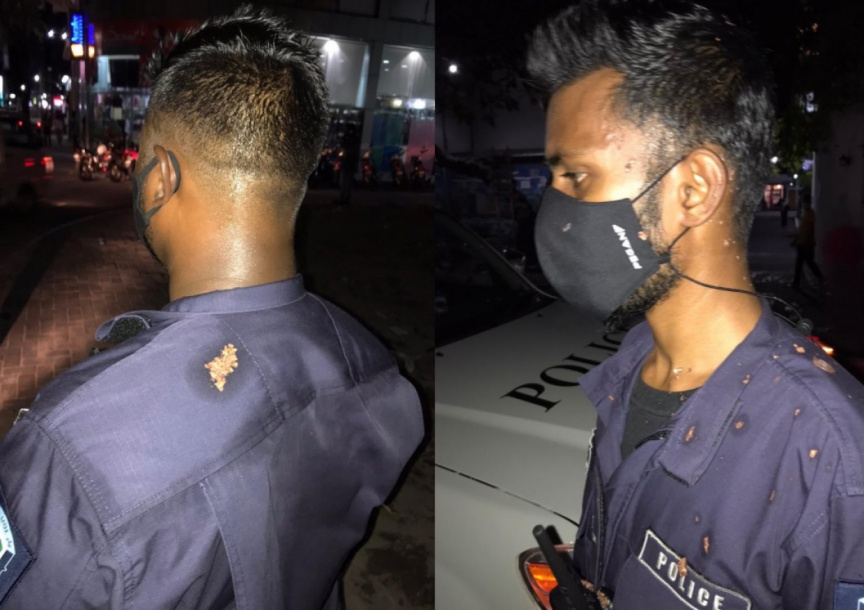 Combined photos of two police officers who were spat at during a protest staged by the opposition PPM-PNC coalition on July 28, 2020. (Photo/Mohamed Hameed, Commissioner of Police)

Commissioner of Police Mohamed Hameed has voiced condemnation after one or more participants of a protest staged by the opposition PPM-PNC coalition spat on two police officers dispatched to perform public order policing duties.

In a tweet on Tuesday night, Hameed stressed that Maldives is in the middle of a coronavirus outbreak.

He also noted that Maldives recorded the highest single-day spike of local infections this Tuesday.

“Two of our officers who were performing public order policing duties were spat at by a protester(s) tonight,” he said.

“Strongly condemn this uncivilized act. Will be investigated.”

He attached photos showing the two police officers with their faces, the back of their head, and their uniforms covered in spit.

Two of our officers who were performing public order policing duties were spat at by a protester(s) tonight. We are still in the midst of the #COVID19 pandemic and have had the highest number of local infections today. Strongly condemn this uncivilised act. Will be investigated. pic.twitter.com/nihF1NyVGp

A police spokesperson has issued a separate statement announcing that the police will find the culprits and punish them to the full extent of the law.

A police spokesperson has confirmed that two protesters were taken into custody.

The protest comes after the police issued a statement appealing for freedom of expression to be exercised in an “appropriate” manner in light of the coronavirus outbreak situation in the country.

Maldives recorded 137 new cases of the new coronavirus this Tuesday, marking the biggest single-day spike of coronavirus cases to be recorded in the country in nearly two months.

With the new cases this Tuesday, coronavirus cases in Maldives have risen to 3,506.

More than 60 of the patients are hospitalized.

Meanwhile, 2,547 coronavirus patients have since recovered, while 15 have died from complications.

Health Minister Abdulla Ameen has issued a short statement via Twitter asking for the public to take necessary precautions, warning that the “sound of the danger alarm is getting louder.”

'Protests will go on, virus increase, tactic for fear'