Opposition: Protests will go on, virus increase, a tactic for fear 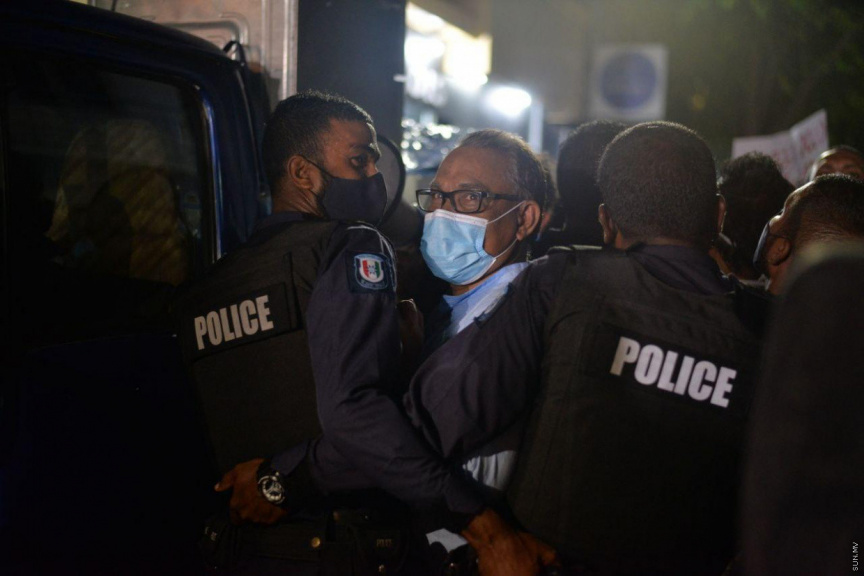 Opposition leader Abdul Raheem Abdulla is being flanked by police during protests in Male' City on July 28, 2020. (Sun Photo/Fayaz Moosa)

People’s National Congress (PNC) leader Abdulla Abdul Raheem has said that the series of opposition protests would go ahead despite an increase in the number of COVID-19 cases which he described as a tactic by the government to induce fear in opposition members.

Two protests have been held abruptly in Male’ City by the opposition parties, and Abdul Raheem said that the protests would not be held on the Hajj Day.

The protests come as Health Protection Agency (HPA) issued warnings against such public gatherings which may lead to a higher spread of the virus.

Abdul Raheem said that the protests held last night were by the public.

“This is something that the citizens have come out for. PPM or PNC have not taken the initiative in this. Wherever there are citizens fighting for their rights, PNC and PPM will be present.” Said Abdul Raheem who was the former MP for Fonadhoo.

Abdul Raheem went on to say that the situation with the virus had deteriorated due to the ineffectiveness of the government.

What I have to say about the increase in numbers is that, that it is not fully correct. They are attempting to frighten the people.” Said Abdul Raheem who accused that the government was using COVID-19 as a barrier to getting away from fulfilling their responsibilities to the people.

“We are protesting with all the safety measures. If a mask is lost during the protests, extra masks are provided. Sanitizers are also available.” Said Abdul Raheem.

Those who spat at police were not part of protests

Individuals accused of spitting at police officers during the protests last night were not members of the protests, opposition parties have said.

Commissioner of Police Mohamed Hameed had tweeted last night that the officers were in the line of duty when they were spat at. The Commissioner said that it was an uncultured and uncivilized act by some during a time when COVID-19 was running rampant in the nation’s capital.

PPM deputy leader Ahmed Shiyam later tweeted that the individuals involved were not part of the parties and that the opposition parties did not encourage such behavior.

Shiyam who is the MP for Naifaru, also added that police would now be aware that the act was planned by some others and called on the authorities to arrest them after referring to CCTV footage.

Abdul Raheem Abdulla also tweeted that PNC and PPM would never face-off with police or MNDF.

“The two institutions have our love and respect. We are always proud of the Maldivian defense force and police.” Said Abdul Raheem.

Elections Commission Vice-President Ahmed Akram also called on political parties to obey the laws and regulations after the protests in the capital last night.

He tweeted last night that at a time when the authorities were working to control the situation with COVID-19, political parties are to conduct activities adhering to the regulations and laws.

Police issued caution regarding the current situation in the country after the protests last night. Police also said that protesters were not wearing masks and not maintaining social distancing

Maldives confirmed its highest number of COVID-19 infections in weeks last night with a total of 137 cases. They include 92 locals.