Editors: Regulation amendment of Media Council, an act of intimidation 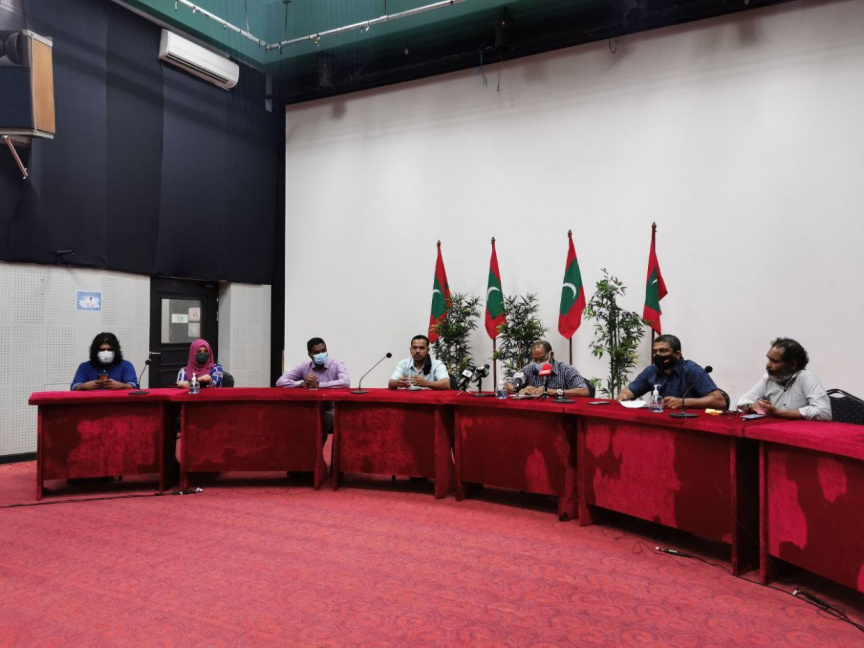 Senior officials of media in Maldives during a press conference on July 9, 2020. (Sun Photo/Fayaz Moosa)

Editors of some of the most prominent media in the Maldives have accused the parliament of threatening the free media of the country by ordering changes to the regulations of the Maldives Media Council.

The Parliament’s Committee on Independent Institutions recently noted that media reports of the “Safari Rape Case” had led to discontent among the public. A letter signed and sent by Fathimath Niusha, Secretary-General of the Parliament to the Media Council gave an ultimatum to amend the regulations of the Council. The ultimatum was regarding action to be taken against any media that violate the ethical and disciplinary standards of media. The ultimatum by the parliament expired on July 8.

A conference held by the editors of leading news media in the country last night saw them condemn the actions by the parliament. The conference was named “Editors Guild” and saw top editors of the country speak against the ultimatum issued.

Sun Online’s Chief Editor Ahmed Zahir (Hiriga) speaking at the conference said that he could not see the exposure of those accused in the safari rape case by authorities. He noted that the prioritization of the victim’s “interests” was an effort to “undermine” the case.

The case, as reportedly differently across various media, had sparked outrage by the public against the perpetrators. A report published on an unregistered media named “Mendhuru Online” was dismissed by police as containing wrongful versions of the case. Police had said that the victim had refuted the version of the events and was even seeking to pursue legal remedies. The report was requested to be removed.

Speaking further, Ahmed Zahir said, “The Media Council should investigate and expose the truth behind it (the report). However, it is extremely concerning for us when the council is ordered to fine a certain media or act in a certain manner, before the matter could be addressed,”

“Broadcom also issued a letter or a statement to broadcasters saying that the matter would be investigated if broadcasters reported the case by referring toa publication. That is an act of intimidation. That is not something acceptable to us. If there is a free media, that freedom must exist.”

Chief Editor of One Online Sinaan Ali said that an ultimatum of seven days to amend the regulation to fine media was something questionable.

The Media Council was formed of media personnel and is to operate as an independent unbiased institution, said Sinaan. There were set regulations and policies as well as Committees within the Council to investigate such matters, said Sinaan.

Sinaan said that the Parliament should not be direct instructions to the media Council regarding the investigation of such matters.

“We can only take that as an act of intimidation. In any situation, to investigate this media or that media, the Media Council will do that. Arrangements for the purpose are made within the media.” Said Sinaan.

The proposed fine of MVR 2,000 on media that violate the ethics standard was not for that purpose, but to simply to intimidate, said Sinaan.

Maldives Broadcasting Commission was instructed by the Parliament to investigate the issue of Channel 13 broadcasting the published version of events by Mendhuru Online in the Safari Rape Case without making any edits or changes.

Referring to the move, Sinaan said that he admitted the Media Council should investigate any violation of ethics by a media.

“Regulations are formed for the purpose through the law. That things have to proceed within the regulations. That is how the media have accepted it. The body (Media Council) is representative of the media. An act of intimidation cannot be taken outside of that scope.” Said Sinaan.

Chief Editor of Avas Online, Adam Haleem (Mundoo), speaking at the conference said that the practice of registering media and broadcasters was slowly fading away from the industry in developed communities. However, since the practice is still in place in the Maldives, Haleem said that it was the right way for things to be conducted.

It was a “civilized” practice to cite content from other media and broadcasters in the country, according Haleem.

“Just provide a reference and use.” Said Haleem.

Chief Editor of The Press Ali Shamman reminded that the government always spoke about the importance of independent media.

“The former President Mohamed Nasheed, during the MDP National Congress, said that they were the servants of the public. If the statement was in reference to parliamentarians, I have to say that they include individuals who know the media very well. Some of them are on the Committee that ordered the Media Council to operate in a certain manner in the issue we are advocating for. They know what the media is and how it works. It is not acceptable for us that the Council is ordered to do so, when the circumstances are such.” Said Shamman.

Senior Journalist of Dhiyares, Ahmed Azaan also expressed concern that the parliament secretariat instructed the Media Council in a certain manner. He vehemently said that it was not a power granted to the Parliament and especially the Secretary-General to order the amendment of a specific regulation by the Media Council.

Azaan accused that the order to form a specific regulation during a time when information that involves top state figures showed that the media was not permitted to speak about the actions of certain individuals in the country.

“I also believe that the amendment of the regulation for an MVR 2,000 fine is an act of intimidation. I have received information from a parliamentarian that it was Speaker Mohamed Nasheed who ordered the Committee to send the letter.” Said Azaan.

She also said that difficulties in accessing information of the state was being faced as of recently. They include information surrounding infant mortality cases.

Deputy Editor of Vaguthu, Zaheen Abdulla also shared the concern over the restriction of information. He noted the banishment of Vaguthu from police media groups for more than a year.

Speaking in the conference, Ahmed Zahir from Sun Online said that he and industry members would always advocate on the rights of media and would even protest if there were efforts to lock the media.