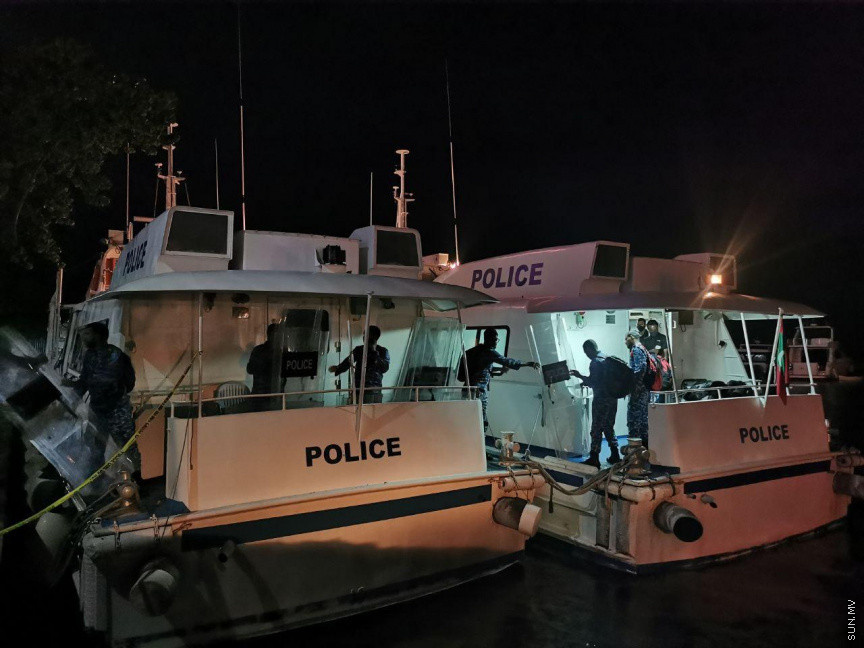 Police personnel from Male’ City departing to the island of B. Bodufinolhu to quell violent unrest by migrant nationals on the island who took some Maldivians hostage on July 2, 2020. (Sun Photo/Fayaz Moosa)

Police and MNDF personnel from Male’ City have departed to the island of B. Bodufinolhu to quell violent unrest by migrant nationals on the island who took several Maldivians hostage. The island is in the same lagoon as the inhabited island of B. Thulhaadhoo.

To read the initial article on the unrest, click here.

Earlier today, an individual on the boat with police said that in the initial attempt to land on the island earlier today by some 50 officers to try and quell the unrest were met with hostility. Police could not step on the island.

The migrants were on the jetty area of Bodufinolhu, armed with makeshift metal spears. They reportedly threw the spears at officers.

Police have now begun a special operation against the unrest with officers from Male' City departing a short while ago. MNDF personnel have also departed to the island.

It is reported that there are 200 migrants on the island who are protesting and burning infrastructure over unpaid wages.

The migrant workers have taken 15 Maldivians hostage, Sun has learned. They reportedly barred the local workers on the island from leaving today.

Those taken hostage include an individual from Thulhaadhoo and four from the island of Sh. Milandhoo.

“It seems that the migrants chased the man with metal spears. But he escaped without being harmed.” Said an individual that spoke with Sun regarding the earlier events.

Another individual that spoke with Sun from Thulhaadhoo said that police had initially tried to reach the island around 15:30 today.

“However, they (migrants) were too enraged and the efforts failed. Police tried once again in the evening. Along with some local individuals who were armed with metal bars due to possible violence. However, they also had to turn back. So, police from nearby islands and R. Atoll were gathered onto Thulhaadhoo. Since the islands are small and dispersedly located, police had to gather equipment from different islands. Around 30 police.” Said the individual.

“To avoid any injuries, we turned back. They have secured the entire island.“ said the individual who also added that the migrants regularly visited the island of Thulhaadhoo.

Thulhaadhoo Council President later said to Sun that police had rescued four locals from the island while a fifth escaped on his own. He added that five migrants from India and Sri Lanka also escaped from the island by swimming to a nearby barge. He said that one migrant was arrested by police.

MP for Milandhoo Ali Riza, who is the Managing Director of the company which is developing the island, admitted that the workers on the island were owed four months of wages which were unpaid due to COVID-19.