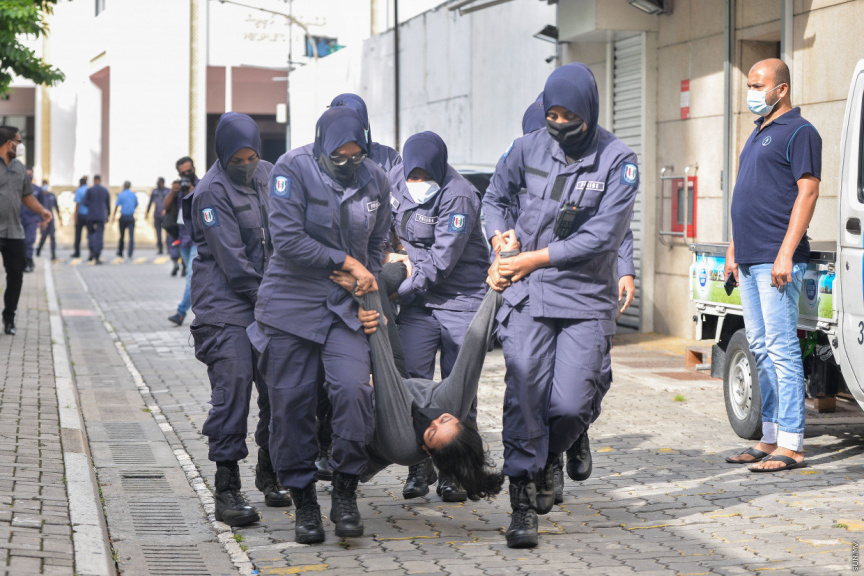 Police disperse a protest staged by left-wing political movement Navaanavai in front of the Parliament on June 22, 2020. (Sun Photo/Fayaz Moosa)

Home Minister Sheikh Imran Abdulla, on Wednesday, said he does not believe the police had acted the most appropriately in dispersing the protest staged by left-wing political movement Navaanavai in front of the Parliament earlier this week.

Navaanavai staged its protest “Majlis Heylavvaalaa!” which translates to “Wake up the Parliament” on Monday.

The police had pushed back protesters from in front of the Parliament as soon as it began. A large number of police officers were involved in dispersing the protesters, some of whom were seen being dragged away.

Home Minister Imran, was summoned for questioning to the parliamentary floor on Wednesday morning. South Galolhu MP Mickhail Ahmed Naseem questioned the Minister regarding the action of the police in dispersing the protestors.

Imran responded that the police had “not acted the most appropriate way” in dispersing the protest, and that he wished to change how police act in dispersing unlawful protests.

“I wish for this to change. I hope that you [the Parliament] will work together with us in this,” he said.

Fonadhoo MP Moosa Siraj questioned why the police had not been wearing their nametags.

Imran responded that he hoped a solution for the issue to be found in the Police Service Bill which is currently under the review of a parliamentary committee.

Navaanavai spokesperson Fathimath Shaaira told Sun last week that the protest was being staged to further demands to; stop evictions due to inability to pay rent amid the coronavirus crisis, expedite disbursement of income support allowance, provide sufficient funding towards efforts to protect women and children, and stop environmental damage.

The day after the protest, Imran wrote on Twitter that he wished to have the police develop the capacity to disperse unlawful gatherings professionally.

“I wish to see police develop the capacity to disperse unlawful gatherings professionally, with a focus on protecting human dignity. God willing, I will ensure this in the days ahead through education and training of police officers,” wrote Imran.