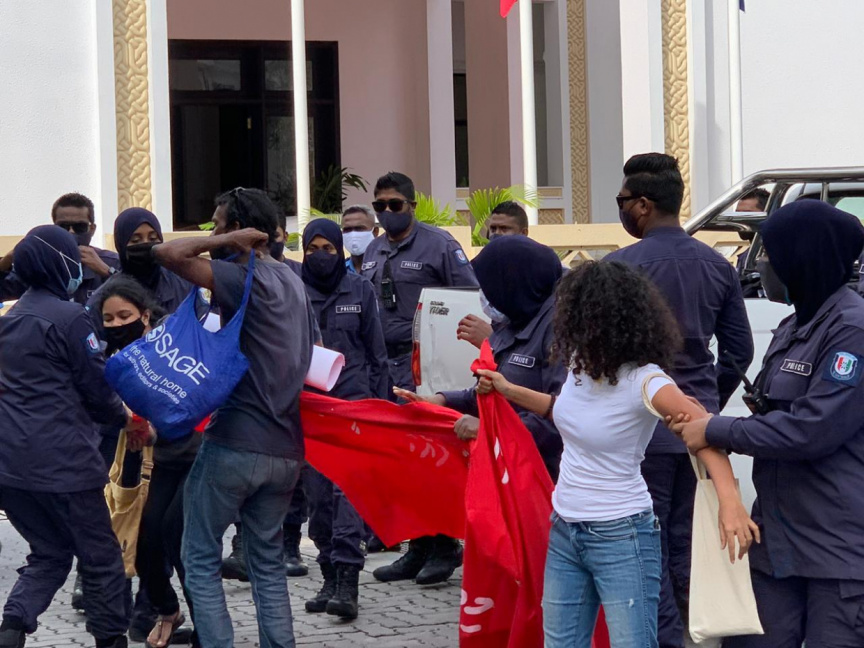 Police disperse a protest staged by left-wing political movemennt Navaanavai in front of the Parliament on June 22, 2020. (Photo/Navaanavai)

Maldives Police Service, on Monday, dispersed a protest staged by left-wing political movement Navaanavai in front of the Parliament House.

Navaanavai’s protest is titled “Majlis Heylavvaalaa!” which translates to “Wake up the Parliament”.

In an interview to Sun last week, Navaanavai spokesperson Fathimath Saaira said the protest was being staged to make four main demands; stopping evictions due to inability to pay rent, stopping environmental damage, providing sufficient funding towards efforts to protect women and children, and expediting the disbursement of income support allowance.

Protesters began gathering in front of the Parliament House at 08:30 am on Monday, armed with banners and posters. They were wearing masks and stood apart from one another to maintain physical distance.

They were immediately pushed back by the police, who, shortly after Navaanavai announced plans to stage the protest, warned against holding protests  and any other form of public gatherings during the state of public health emergency which remains in effect in Maldives over an outbreak of the new coronavirus.

The police said in a statement on Saturday that while residents of the capital are allowed outside without a permit during non-curfew hours under the second phase of the relaxation of the lockdown, people remain prohibited from gathering in crowds exceeding three people.

They warned that public gatherings of more than three people will therefore violate the orders of the Director General of Public Health – an offense which is legally punishable.

“Maldives Police Service therefore advises not to hold gatherings against the orders of the HPA amid the state of public health emergency, to prioritize the health and safety of the beloved members of the general public, and for everyone to adhere to the instructions of the Health Protection Agency,” said police in their statement.

Navaanavai responded that they will hold the protest as planned.

Navaanavai maintains that freedom of assembly and freedom of expression are fundamental rights which all authorities must respect.

They regrouped in front of Hotel Jen after they were dispersed from in front of the Parliament House.