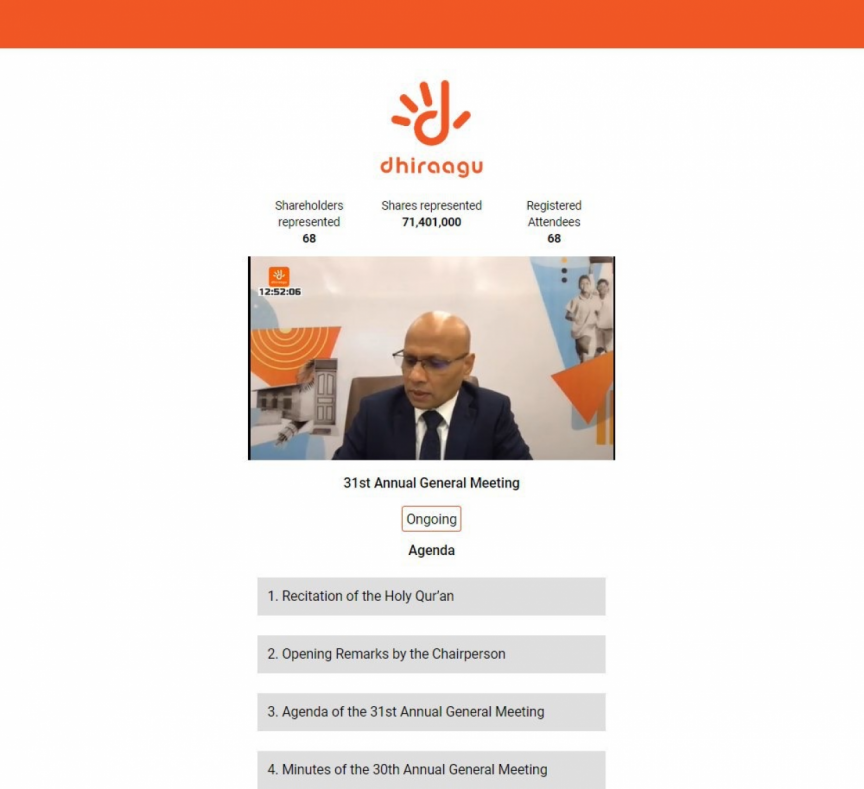 The meeting was taken part by 68 shareholders of the company. During the meeting, the company passed to distribute MVR 12 per share from its profits last year. The company distributed MVR 4.14 as interim dividends and MVR 7.86 as final dividends.

Speaking about the virtually held meeting, Managing Director and CEO of Dhiraagu Ismail Rasheed said that it was a different experience and certainly a new development.

“This is one of the founding stones for a digitalized future. Choosing digital ways is especially important right now. The reasons are because these digital meetings allow the opportunity for shareholders to take part from different locations, and are encouraged to get familiarized with digital resources.” Said Ismail Rasheed.

Dhiraagu said that it had held on to its market share in the mobile, fixed broadband, enterprise, and managed service category customers as well as in the telecommunications sector. The company also celebrated several successes last year.

Dhiraagu also became the first company to commercially provide 5G services in South Asia and the Maldives when it introduced the service to the three most populated areas of the country. In addition to this, the company provided customers with ultra-fast internet services to its customers in its efforts to up the internet speeds to 1GBPS. The service is currently available to 13 islands.

The company also plays an important role in the community development of the country. It conducted the Dhiraagu apprenticeship program, Maldives Road Race, and Dhiraagu special sports festival last year as well. Several programs focused on encouraging and increasing business start-ups in the country among the youth were also conducted by the company during this time.