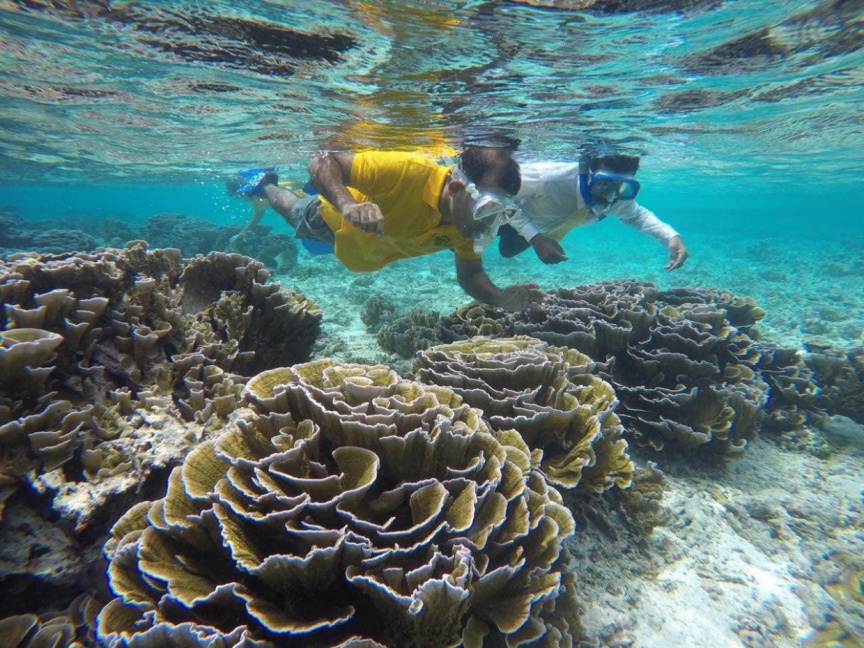 Photo shows Speaker of the Parliament Mohamed Nasheed snorkeling. The former president founded the Maldives Coral Institute to raise awareness and protect the coral reefs of the country. (Photo/Mohamed Nasheed)

Speaker of the Parliament Mohamed Nasheed has said that the planned commercial harbor in Gulhifalhu is an important project that could provide numerous benefits, however, the project could not be allowed to destroy the coral reefs of the country.

The issue has been a controversial topic, with many locals expressing concern over the environmental impact of the project on the surrounding dive spots and coral reefs. A huge land reclamation project is now underway for the planned harbor and the Environmental Protection Agency (EPA) and the government are on the receiving end of barbed criticism for the project.

Read the full coverage of the Gulhufalhu project.

A tweet by Nasheed today praised the head of EPA Mohamed Naeem. He added that most infrastructure development projects had a negative impact on the environment.

Nasheed said that the need for additional land in Male’ area was because there was no other option for the residents who were in need of housing. He also stressed the importance of reducing overcrowding in the area. Nasheed’s tweet has also garnered criticism from many.

A tweet sent out in English by the Speaker later today read that the Parliament and the EPA were recommending stronger measures to protect the coral reefs near Gulhifalhu.

He said that “I believe the government will accept these (recommendations).”

The Majlis & EPA are recommending new and stronger measures to protect the coral reefs near the ongoing dredging work in Gulhi Falhu. I believe Government will accept these. The Gulhi Falhu work is important & brings many benefits. But it can’t be allowed to destroy local reefs.

EPA has previously said that it did not see a viable reason to halt the project based on its surveys, despite the numerous public calls to do so. Planning Minister Ahmed Aslam has also spoken on the matter. The Minister said that the economic value of the project outweighed the environmental impact of the project.

The project is now the subject of an inquiry by a parliamentary committee.

Several organizations including one headed up by Speaker Mohamed Nasheed have expressed concern regarding the impact of the project on the ecosystem. The Maldives Coral Institute of Speaker Nasheed, even sent a letter to the Parliament regarding recommended amendments to the laws for such projects.

Maldives Diver's Association and several resorts in the country have also expressed concern. Diver's Association said that protected areas such as the Hans Hass Place, Kuda Huraa, Banana Reef as well as Maagiri in the area will be affected due to this project.