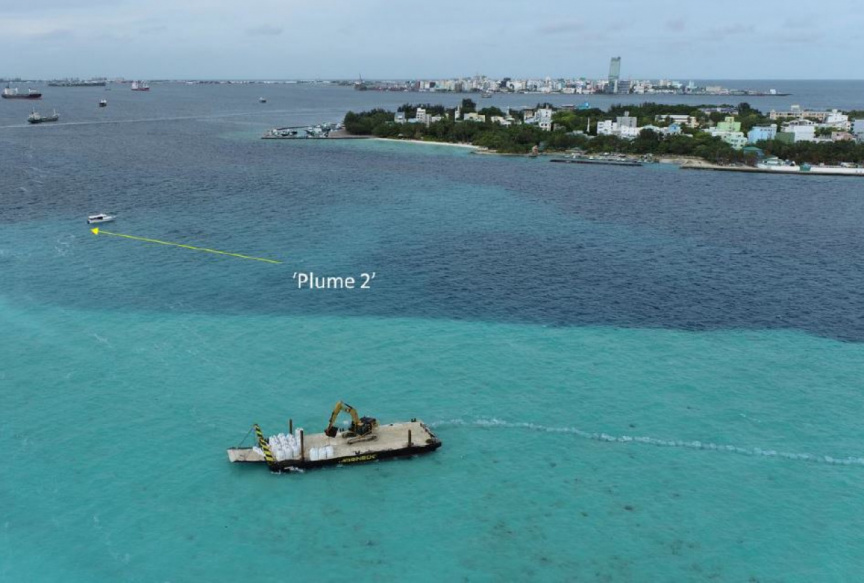 Environmental Protection Agency (EPA), on Saturday, said that despite the calls by environmental activists to halt land reclamation in Gulhifalhu citing environmental damage, the agency’s assessments does not indicate cause for the project to be halted.

The ongoing land reclamation project in K. Gulhifalhu is part of a larger project to relocate Maldives’ main commercial port, which is currently situated in the capital Male’ City. The project will see the reclamation of 192 hectors of land. The Environmental Impact Assessment (EIA) conducted for the project states it will cause environmental damage, with sand and sediments piling up on the surrounding coral reefs, muddying the waters, and possibly killing the coral reefs.

Environmental activist groups warn the project is a threat to 30 dive spots, including the Vilimale’ reef.

The Parliament’s Environmental Committee, which is conducting an inquiry into the project, summoned officials from the Planning Ministry, EPA, and the consultant which conducted the EIA on the project for questioning during a meeting on Saturday morning.

Speaking at the meeting, EPA’s Director General Ibrahim Naeem said the EPA will not order the halt of the project, barring violation of the mitigation measures ordered by the agency, or if the agency finds the project to be causing irrevocable damage to the environment despite the measures.

“If we find it to be causing irrevocable damage despite the implementation of measures to mitigate the impacts highlighted on the report through our surveys,” he said.

The issue of key concern to environmental activists is the potential damage to Vilimale’ reef. Recent pictures show a large quantity of displaced sediment travelling towards Vilimale’.

However, Naeem said that assessments show no apparent sediment buildup on the Vilimale’ reef. He said the sediment levels in the area were below the standard set by the EPA.

Speaking at the meeting, Planning Minister Mohamed Aslam said that it was of vital importance to develop a new port in order to solve the shortage of space at the main port.

Aslam said the government had initially considered building the port in K. Thilafushi, but had abandoned the plan because the island did not meet the required specifications.

Gulhifalhi is the most suitable location in the Greater Male’ Region to develop the port in, he said.

EPA: Will take action for taking sand from beaches

Barge that wrecked on Noomara reef in 2019 pays fine

EPA: Permit to kill animals must be changed