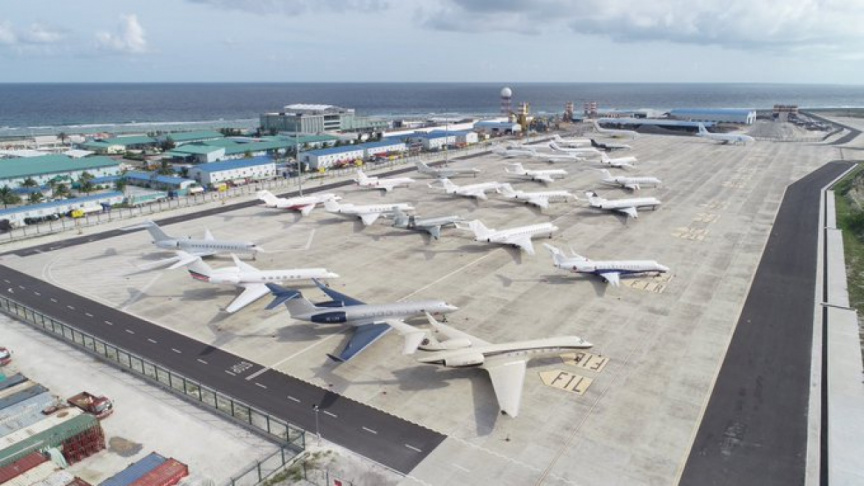 Transport Ministry, on Wednesday, said the office was working on allowing airports which meet aviation guidelines to accommodate private jets once the Maldives reopens its borders to tourists.

Transport Ministry officials were summoned for a virtual meeting of the Parliament’s National Development and Heritage Committee for questioning regarding the Transport Ministry’s operations amid the coronavirus outbreak on Wednesday night.

In response to a question, Minister of State for Transport, Ahmed Zuhair said the government did not expect a large volume of flights immediately after the country reopens its borders to tourists.

“When we reopen for tourism, [the volume of flights] will not be up to par with expectations, immediately. We expect it will attract charters and private jets,” said Zuhair.

The Tourism Ministry has announced plans to reopen Maldives’ borders to tourists in July, and is finalizing guidelines to practice “safe tourism”.

Zuhair said the Transport Ministry was working on allowing a few more airports in addition to the Velana International Airport to operate private jets.

Other airports in the country which have the capacity to accommodate private jets include N. Maafaru Airport, A. Dh. Maamingili Airport, Dh. Kudahuvadhoo Airport, G. A. Kooddoo Airport and Gan International Airport.

Zuhair said the Transport Ministry was drafting aviation guidelines which fall in line with the standards set by International Civil Aviation Organization (ICAO), International Air Transport Association (IATA), Civil Aviation Authority (CAA) and Health Protection Agency (HPA), based on which it will grant permission for airports to accommodate private jets.

The Transport Ministry is in the process of finalizing the guidelines.

Zuhair noted that though Maldives may reopen its borders, the volume of tourists who will stream into the country will depend on whether or not other countries also reopen borders and lift other coronavirus restrictions.

He said the Transport Minsitry expected to gain a clearer picture of the level of demand to operate international flights to Maldives over the next two to three weeks.

The populous capital has since become the epicenter of the coronavirus outbreak in the country, contributing to over 90 percent of the total cases.

While 1,841 people are confirmed to have contracted the new coronavirus in Maldives, this includes 644 people who have since made full recoveries. Seven have died from complications.

Tenants for Hiyaa units to be finalized in July