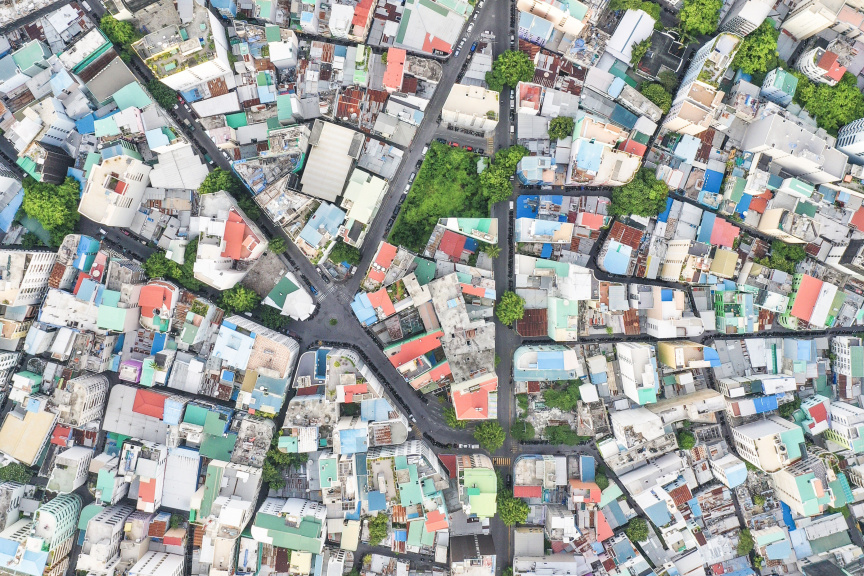 May 12, 2020: Photo shows a drone photo of Male' City as the capital city undergoes a lockdown and curfew due to COVID-19. (Sun Photo/Fayaz Moosa)

The lockdown order imposed on the capital city of Male’ has been extended by 14 days once again.

The city was placed under full lockdown and curfew on April 15 after a community case of COVID-19 was identified in the. More than 42 days have passed since, and the order has yet again been extended to curb the spread of the virus. However, this time order was imposed alongside easements rolled out by the government for public convenience.

Authorities are sure that the country has turned a corner with the virus and is now safe from the worst-case scenario. Nevertheless, they are still braced for a resurge of the virus and have constantly warned the public of this very possible danger. The Maldives is not fully out of the woods yet, and health experts are advising people to undertake all restrictive and safety measures, despite the easements.

The lockdown order was extended under the orders of the Director-General of Public Health Maimoonaa Aboobakuru. Basic services such as public transport and travel out of the city remain suspended.

The government has, however, untightened some of the restrictions in place.

Members of the security services and law enforcement officials (MNDF and Police) will be exempt from any restrictions of the lockdown. Health workers and officials as well as employees of health institutions in the country, ambulances, ambulance drivers, and those with an issued permit as well as media personnel with an issued permit from the National Emergency Operations Center will also be exempt from any restrictions.

The state of Public Health Emergency in the country was also extended last night to expire on June 29.

Urged to refrain from gatherings, parties

Despite the limited easements, authorities have urged the public to refrain from parties and gatherings to prevent a resurge of the virus. Health Minister Abdulla Ameen had announced last night that the ‘R Number’ of the virus in the Maldives had been reduced to 1.4 from 3.8, due to the stringent and quick measures as well as the patience of the public.

In a presser today, Health Ministry’s Deputy Director-General Aishath Saamiya said “We do not recommend any event in the upcoming month. To hold meetings, gatherings, or parties together.”

Dr. Nazla Rafeeg from the NEOC also stressed the importance of refraining from such gatherings even with a permit, in a press conference last night.

Easements were due to treatment facilities

Health Ministry also announced today that the easements introduced to the capital were in light of the increased treatment capacity in the health sector.

The Deputy Director-General of Health Ministry Aishath Saamiya said in the press conference that major success has been attained in the country's efforts.

The country now has 1,500 beds for quarantine purposes compared with the initial 12. The same was the situation with isolation facilities. The 298-bed COVID-19 village recently constructed in Hulhumale’ will be in use starting from June 1, Saamiya added. The Tree Top Hospital in close proximity with the COVID-19 village also has a bed capacity of 100, out of which 45 were currently in use.

Home Minister: Do not take advantage of easements

Authorities have warned that the lockdown order could once again be fully reinstated if the situation deteriorated.

The Maldives has confirmed more than 1400 cases of the virus along with 242 recoveries.