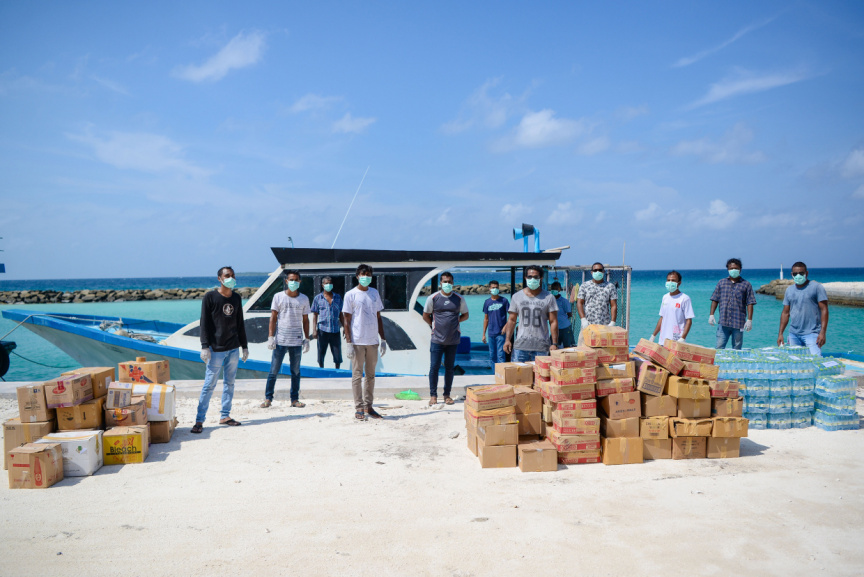 Islanders of Funadhoo assist virus-hit Narudhoo as a gesture of goodwill on May 17, 2020. (Sun Photo/Mohamed Afrah)

Islanders of Sh. Funadhoo have assisted the virus-hit island of Narudhoo in the same atoll as a gesture of goodwill.

11 cases of COVID-19 have been confirmed on the island of Narudhoo, which is the second-highest tally of confirmed cases when compared by islands in the Maldives. The number of cases are the highest in the capital city of Male'. The cases in the island are all traced back to the Amaazu Boat, a passenger boat that traveled from Male’ City to the north of the country.

A boat from the capital island of the atoll, Funadhoo berthed at the harbor of Narudhoo today. The boat carried supplies of food items other supplies to assist the island as it undergoes a lockdown order. Funadhoo Council President Ahmed Ibrahim Fulhu stated to Sun that the food items were nearly worth MVR 50,000 and was collected in two days. The islanders of Funadhoo, fishermen, businesses, and even institutions of the island took part in the collective effort.

85 packages were delivered to households of Narudhoo. They included items that can be used in the month of Ramadan. Each package also included three fresh fish for each household.

“A lot of assistance from many including government employees, businesses were received.” Said Ibrahim Fulhu.

Narudhoo Council President Ahmed Arif accepted the packages and expressed his gratitude on behalf of the island to the assistance provided. He added that the relationship between the two islands were strengthened due to the gesture. The Council President also noted that many other islands in the atoll were also providing assistance during the difficult time.