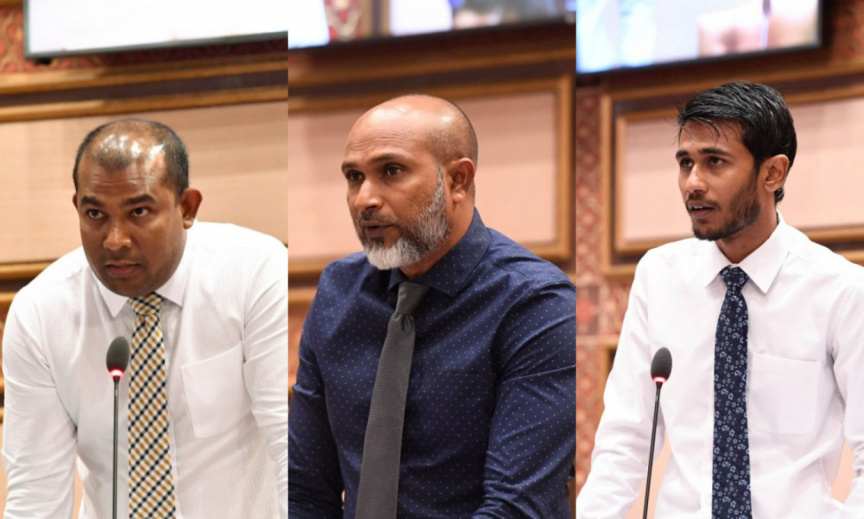 MP for South Thinadhoo Abdulla Saneef has levied accusations against two other MDP MPs for traveling to Male’ City at a time when the whole country was in a state of lockdown, by taking unfair advantage of their positions.

Speaking in today’s meeting of the Committee on Member’s Privileges and Ethics of the parliament, MP Saneef said that the two MPs had taken an unfair advantage of their positions of power by traveling to Male’ amidst the lockdown.

The actual issue at hand was the case of MP Abdulla Riyaaz who had traveled to Male’ from his constituency of Thimarafushi during the lockdown. Heavy criticism has been directed at the case as well.

The issue was submitted to the Committee by Fonadhoo MP Moosa Siraj who stated that in a letter addressed to the Speaker that such actions caused enmity towards MPs among the citizens. He added that it also resulted in accusations of using undue influence against MPs.

MP Abdulla Riyaaz was found to be not in violation of any ethics, for traveling after obtaining the necessary required permits from the authorities, the Committee decided today.

While MPs in the committee agreed upon this point, MP Saneef spoke in different rhetoric.

Agreeing that there was no issue with the case at hand, the MP stated that he was confused with the policy on Police issuing special permission to travel that was not extended to other citizens.

MP Saneef said that MP Mughny and MP Firushaan had traveled to Male’ after contacting “MC” (referred to as Commissioner of Police Mohamed Hameed).

“In connection with that, I say this because I am aware that the two other MPs (MP Mughny and MP Firushaan) arrived in Male’ by taking unfair advantage of their positions. They called MC. MP Abdulla Riyaz got the opportunity to travel to Male’ when they were also working to come, so they were allowed.” Said MP Saneef.

MP Saneef heavily criticized the policy where Police allowed such travels. He said that he could not comprehend why some are being allowed to travel when there are people who have to travel for more urgent and essential reasons.

“There is an issue at hand if whoever they want, were allowed to travel, whenever they wish.” Said MP Saneef.

He said that he did not believe the permission was given in a specific order and that the set policy and procedures were followed for this. It was not acceptable for politicians to obtain permits by contacting the head of Police, said MP Saneef.

“This is not a small issue, unlike how some view. This is something that resulted in the anger of many citizens being expressed towards us. We should truly see whether this was done appropriately.” Said MP Saneef.

However, MP Saneef stopped short of submitting to an inquiry regarding specific individuals. He added that there was no issue with the MPs before saying that what should be reviewed was how the permits were issued by Police.

MP Mohamed Nasheed Abdulla representing the Nolhivaram constituency has however proposed an inquiry to the committee into how MP Firushaan and MP Mughny traveled to Male’ during the lockdown order.

The entire country is in a state of lockdown after a community case of COVID-19 was identified in the capital of April 15. Non-essential travel between islands was banned by the authorities in a bid to stop the spread of the virus.