5,000 people request to travel out of Male’ to home islands 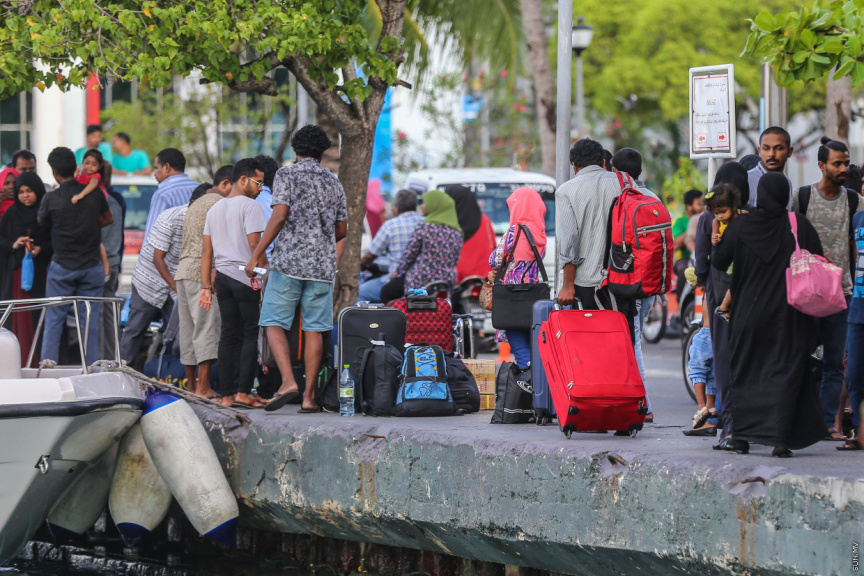 People wait in line to board boats out of Male' City on August 17, 2018. (File Photo/Sun/Fayaz Moosa)

Tourism Minister Ali Waheed, on Monday, said that some 5,000 people had requested the government to be allowed to leave Male’ City and travel back to their home islands.

At a National Emergency Operations Center press briefing on Monday afternoon, for which he appeared alongside Home Minister Sheikh Imran Abdulla, Ali Waheed said that it was not for people to travel out of Male’  to the atolls in light of the community spread in the capital.

“Based on the information at hand, around 5,000 people have requested to travel out of Male’ to other islands,” said Ali Waheed.

Ali Waheed said that 153 resort workers stranded in Male’ due to the lockdown had lodged requests for assistance from the Tourism Ministry.

97 have been taken to quarantine facility and will be reunited with their families in their home islands once they complete the mandatory 14 days in quarantine and are tested for the virus.

The remaining 56 will be added to the government’s ‘managed quarantine’ list which it initiated following the lockdown, said Ali Waheed.

Ali Waheed said that the government was working on increasing quarantine facilities in order to provide support not just to resort workers stranded in Male’, but also all others.

“The aforementioned parties no symptoms of the virus. Since they are currently stranded in Male’, we have decided for the safety of island communities that they undergo a managed quarantine program, are tested, and test negative before they are allowed to leave for islands,” said Ali Waheed.

Home Minister Sheikh Imran Abdulla said that the government had suspended the facilitation of travel of people stranded in Male’ to the atolls in light of the latest projections by health experts, which indicate the situation in Male’ will worsen in the coming weeks.

He said that the government now planned on allowing only those with compelling reasons to leave and that it will be done under a controlled system.

Imran said that the list of people who will be allowed to leave will be compiled after combining the lists with all those institutions, and verifying the information.

Health experts recently warned they expected a huge surge in virus numbers in the coming days, which will peak in the end of May.

Imran said the government was therefore on alert to prevent outbreaks in more residential islands outside of the capital by allowing those in the city to leave.

Ali Waheed said that the system which the government has established will allow those who truly have compelling reasons to leave Male’ to travel to islands.

He asked that those who do not have compelling reasons refraining from lodging requests. He said that the original list of applicants had been below 1,000, but that the number had suddenly surge to some 5,000.

“It’s our appeal that, when those who do not qualify to be on this list apply to go to their islands on vacations and such, the list gets longer and the person who truly needs to leave for compelling reasons is forced to wait. This is now what we want,” said Ali Waheed.

He said the immediate need was to allow those stranded in Male’ due to the lockdown to lodge requests to leave for their home islands, and that the list would otherwise be endless.

“This is no joke, and neither is this simple. If we carry this out in a way that we should not in this situation, there is danger of the virus reaching people in islands which are safe. Therefore, this must be taken seriously,” he said.

Following this remark, Imran advised that local councils strengthen efforts to verify the information on the list.

And Ali Waheed said that the government will revise the list after the first two weeks of the impending surge.

Ali Waheed also said that tourists remained in several tourist resorts, and that some 600 workers in such resorts had requested to return to their home islands.

He said that the resorts had not identified any virus cases and had also completed the mandatory quarantine period, and that the government was collaborating with national airline Maldivian to allow them to leave to their home islands directly from the resorts without undergoing additional quarantine.

'Virus outbreak will likely be controlled in 2-6 weeks'