Minister: COVID-19 outbreak will likely be controlled in 2-6 weeks 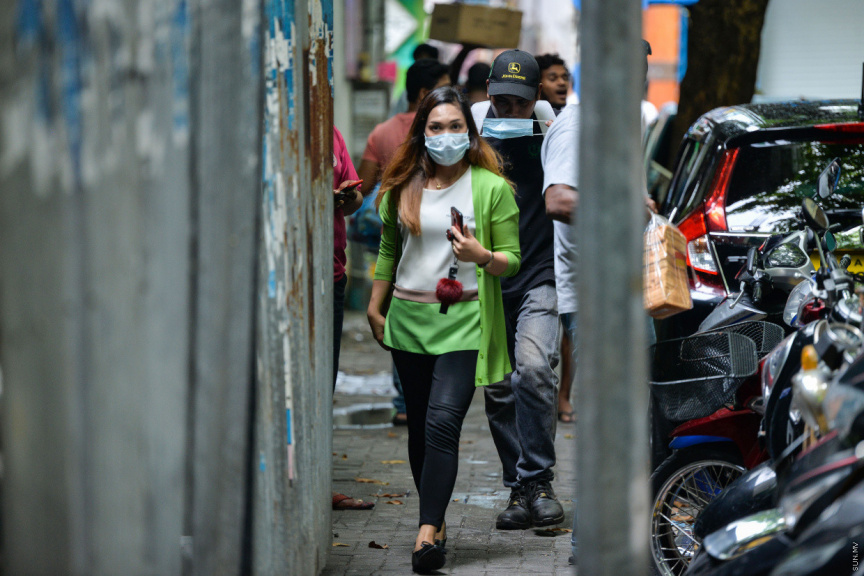 A woman wears a face mask to protect against the spread of COVID-19 in Male' City on April 15, 2020. (Sun Photo/Fayaz Moosa)

Tourism Minister Ali Waheed, on Monday, he expected the COVID-19 outbreak in Maldives to be controlled within two to six weeks.

At a National Emergency Operations Center press briefing on Monday afternoon, Ali Waheed said that similar to the experiences of other countries, Maldives was currently experiencing the most difficult phase of the outbreak, but that if people complied with the lockdown order in the coming days, there was great hope for the outbreak to be brought under control.

He asked for cooperation from everyone to make it possible.

“We are entering a surge. We are entering the most difficult phase of this outbreak. Our focus is towards managing this phase and overcoming it. God willing, if everything goes well, we will control this outbreak within two to six weeks and act similar to how other countries gradually eased their lockdowns, making a best case scenario possible,” said Ali Waheed.

He said that if everything went smoothly, there was hope that Maldives would be able reopen its tourism industry in July.

And in moderate scenario, there was hope that based on the trend of cases; Maldives is able to reopen its tourist industry in October, he said.

Ali Waheed said that other countries had also experienced similar surges in virus cases, and that Maldives would overcome the situation if everyone complied with the lockdown order and other measures during the period.

He said the government would double its efforts during the surge.

“Therefore, our sole instruction at this time is to comply with the measures which have been imposed and to promote solidarity. We will not impose any additional measures which will cause the people additional hardship during the lockdown,” said Ali Waheed.

He also advised the people to care for the elderly by isolating them in rooms inside houses if possible to further prevent any chances of them getting infected in face of the impending surge.

Noting that Maldives was now approaching the Hulhangu (South-West) Monsoon, the government has seaplanes on standby to transport people to quarantine and isolation facilities to avoid any disruptions in sea transport which may occur due to the weather conditions.

Ali Waheed said that while there was hope for Maldives to reopen its tourism industry within this year if virus cases dropped to low or moderate levels, there was no hope of that in a worst case scenario.

He said that when Maldives did reopen its tourism industry, it would be by taking control measures to protect the health and safety of the people.

He said that the Economic Council had drawn up a tourism recovery plan and shared it with the President’s Office.

He said that the plan will be finalized and implemented with the input of tourism stakeholders and members of the general public.

“We have identified the standards we must practice in order to reopen once other countries ease restrictions. This pertains to which airport will be opened in phase one, how and what type of flights will be allowed first, what we will practice during phase two, and after that, how we will ease into a new normal,” said Ali Waheed.

He decline to disclose details of the tourism recovery plan at the press briefing, but said that the plan would be released following discussions with the President’s Office.

Ali Waheed said that it would take at least a year for the tourism industry to rebound from the damage it suffered due to the pandemic.

He also said that when Maldives reopened its borders, it would be done for the sake of the Maldivian people, and not to serve the interests of business owners.

“Tourism remains the solution to the employment needs of the Maldivian people and social issues. We shall see the day,” said Ali Waheed.