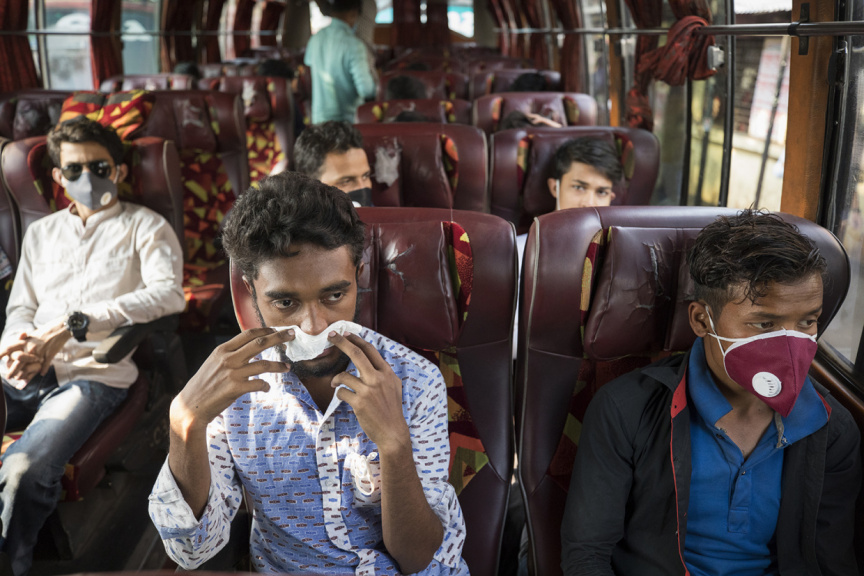 Passengers wear face coverings on board a bus in Bangladesh.

This is how one Maldivian medical student in Bangladesh described the country’s situation.

Bangladesh hosts some 80 Maldivian nationals, most of them medical students and interns. They reside primarily in two cities, the capital Dhaka, and Chittagong. Some live with their families, while others live alone.

All of them are now stranded in a world of fear and uncertainty.

SITUATION MUCH WORSE THAN THE NUMBERS SHOW

Medical students in Bangladesh who spoke to Sun said the real situation is far worse than the official government numbers portrayed.

According to official numbers, Bangladesh has 70 confirmed cases and eight deaths.

“In the hospital I work in alone, some 40 people have died with symptoms consistent with COVID-19. But they were not properly tested,” said Iyad Naseer, a student at the Chittagong Medical College.

“What happens is, if you have symptoms consistent with COVID-19, you are denied hospitalization at regular hospitals. But at the same time, you can’t get hospitalized in designated hospitals unless you are a confirmed case. Patients need to run from one hospital to the other. Amid all this, some people are just dying,” said Zahiya.

With people who show symptoms of COVID-19 dropping dead in the streets, Bangladesh is also short of personal protection equipment which is required to be worn by healthcare workers to protect themselves and their patients. Zahiya said that some hospitals which lacked PPE had ordered interns to report to work by acquiring the equipment themselves. She said that due to this, interns, including Maldivians, were refusing to report to work.

THE DANGER IN VENTURING OUTSIDE

While a nationwide lockdown has been ordered in Bangladesh, the lockdown is poorly enforced.

Many shops have been closed, and the only places open are a few supermarkets with empty shelves. The people, who have no other choice, continue to visit these supermarkets, which have become hubs for COVID-19 transmissions.

Zahiya lives in her college hostel. She said that after the college was closed, the Bangladeshi students at the hostel, before moving back to their homes, had donated all their food supplies to the students who had no choice but to stay back at the hostel.

But the food supplies can only last so long, and Zahiya fears the inevitable time when she will need to venture out of the hostel to purchase food.

“To be honest, I am extremely fearful because I am required to venture out of this hostel. The exit of the hostel is towards the emergency entrance of the hospital. A lot of people go in and out there,” said Zahiya.

Iyad shares an apartment with three other Maldivian students. They had purchased food in bulk on March 16, and expect to be able to live off their food supplies for another week.

But, they too will need to venture out of their apartment once their food supplies run out.

“I fear there will be a food shortage here, given that this is a developing nation with a large population of the poor,” said Iyad. “I am seeing videos of Facebook of people attacking each other over food. We are fearful and anxious having seen these videos.”

RESCUE US, BEFORE THIS BECOMES A SECOND ITALY

All commercial flights to Bangladesh are now suspended, leaving all doors for these students to escape home to Maldives closed.

They plead to the Maldivian government to rescue them.

“The situation is deteriorating with each passing day. Therefore, we are desperate to get out of here before the situation gets any worse, or before this place becomes a second Italy or China,” said Iyad.

Both Zahiya and Iyad pleaded with the Maldivian government to hold a repatriation flight to Bangladesh.

The situation in Bangladesh is much direr than in countries like Sri Lanka, they said.

The Maldivian government has provided assurance it is keeping a close watch over the situation of Maldivian nationals overseas.

The government has also announced it is collaborating with the airline to hold repatriation flights to rescue Maldivian nationals in additional overseas locations, including Bangladesh – bringing hope to Zahiya and Iyad, and the hundreds of other Maldivian nationals who like them, are counting the days until they reach the safe shores of Maldives.