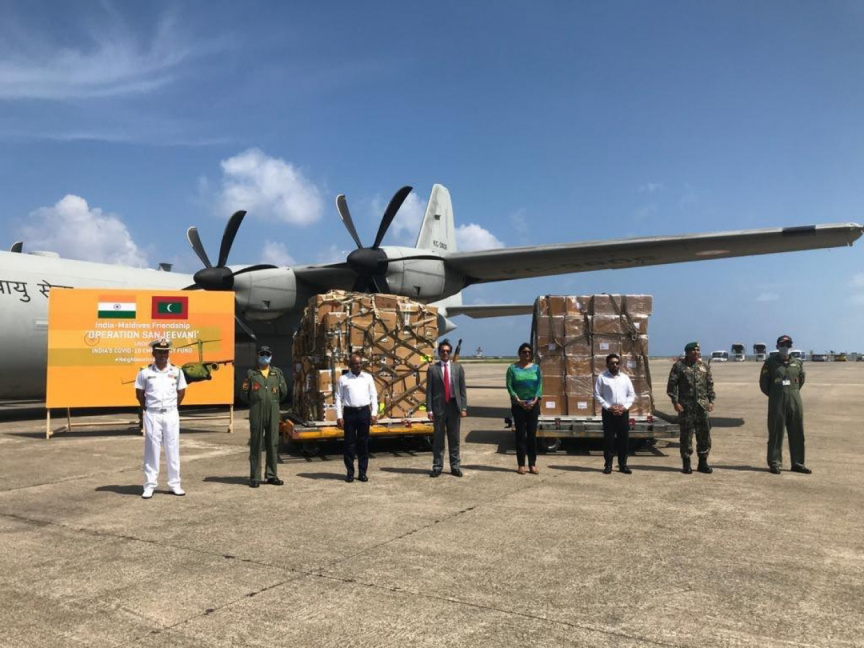 The Indian Air Force, on Thursday, delivered 6.2 tonnes of medicine procured by State Trading Organization (STO) which had been held up in India following the lockdown in the country.

The shipments of medicine were accepted on behalf of the Maldivian government by Foreign Minister Abdulla Shahid in a ceremony at the Velana International Airport this afternoon.

Speaking at the ceremony, Shahid noted Maldives, due to its heavy dependency on imports, was now facing a hard time due to the COVID-19 pandemic and the various measures in place to contain and prevent outbreaks of the disease.

Noting the need for medicine at such a crucial time, Shahid noted that the shipment airlifted by the Indian Air Force contained many essential pharmaceutical products.

He noted that India had always assisted Maldives in times of crisis, and extended deep appreciation to the Indian government.

The Indian Air Force had airlifted the shipments of medicine from New Delhi, Mumbai, Chennai and Madurai on Wednesday, before delivering them to Maldives this Thursday.

Shahid had reached out to his Indian counterpart, Dr. Subrahmanyam Jaishankar, to discuss arrangements to ensure shipments of pharmaceuticals and essential food products continue to be transported to Maldives last week.

Foreign Ministry Communications Director Miuvan Mohamed told Sun that Jaishankar, during his phone conversation with Shahid, had provided assurance Maldives would continue to receive essential imports uninterrupted, despite the lockdown and logistical difficulties.

India had also sent three months’ worth of essential pharmaceuticals to Maldives as emergency relief aid on March 14.