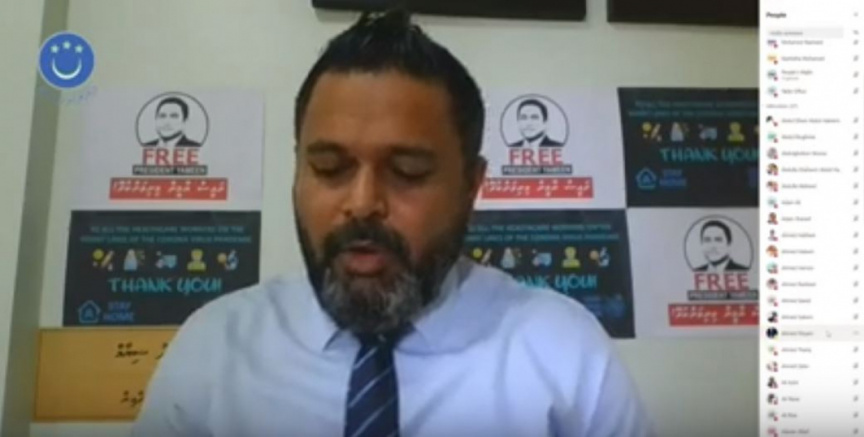 Speaker of Parliament, President Mohamed Nasheed ordered the background in the screen of PPM deputy leader, Ahmed Shiyam to be blurred to censor the posters calling for the release of PPM leader, the former Maldivian President Abdulla Yameen Abdul Gayoom as the Parliament headed to its second day of virtual sittings on Tuesday.

Naifaru MP Shiyam joined the sitting this morning with a number of posters pasted on the wall behind him; among them, posters with messages of appreciation for healthcare workers, and posters which call for the release of President Yameen, who has been sentenced to prison for money laundering.

Once Shiyam began speaking during a debate, Speaker Nasheed ordered for the background to be blurred.

Following this order, Shiyam asked what the issue was.

“In my background, one is a message of appreciation for healthcare workers, and the other is a call for the release of a President who has provided exemplary service to this nation,” said Shiyam.

In response, Nasheed said the Counsel General wanted it known that the use of any logo, mark or slogan was against the Parliament’s regulations.

“Therefore, I request that the background of the honorable member be blurred,” said Nasheed.

Parliamentarians from PPM and its sister party People’s National Congress (PNC) had used ‘Free Yameen’ posters to hold demonstrations on the parliamentary floor in the past.