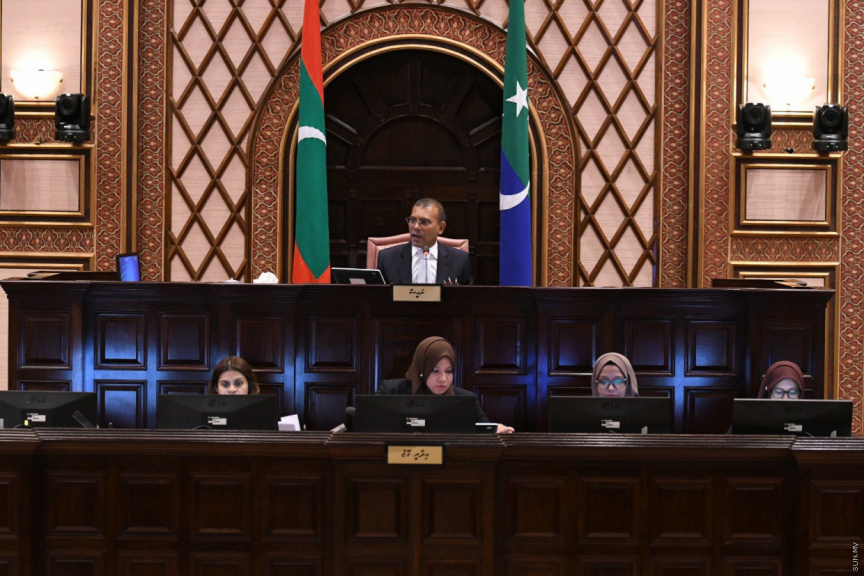 Speaker of Parliament, former President Mohamed Nasheed presides over a sitting of the parliament. (Photo/People's Majlis)

The parliamentary sitting on Wednesday morning began with the presentation of an emergency motion by PNC deputy leader Adam Shareef Umar urging contingency measures in response to a potential outbreak of the deadly COVID-19 virus in Maldives.

Shareef, the representative for Maduvvari constituency, warned that the global outbreak, if it spread to Maldives, had the potential to disrupt the transport system and cut off outer lying islands from access to essential products such as petroleum and staple food.

Prior to calling the motion to vote, Parliament Speaker, President Mohamed Nasheed indicated his opinion regarding the subject.

He said the World Health Organization (WHO) hadn’t advised cutting off transport.

Nasheed’s remark was ill-received by Shareef, who alleged that it to be a deliberate attempt to influence the vote.

The motion was, however, accepted into the Parliament with 44 votes.

The first to speak during the debate, Kaashidhoo MP Abdulla Jabir said that Maldives would not face a staple food shortage, and that in the unlikely event that a shortage did happen he would “take matters into my own hands” to resolve the shortage.

He, however, said he did not believe in the possibility of the outbreak spreading to Maldives.

While Jabir expressed adamant confidence in Maldives being safe from coronavirus, Speaker Nasheed said that he believed it highly unlikely for Maldives to remain unaffected by the outbreak.

He said that while Maldives must prepare for a potential local outbreak, sinking into panic and hoarding up food was irresponsible.

The best course of action for the time being is to follow WHO guidelines and implement precautionary measures, he said.

ALLEGATION VIRUS FEARS BEING USED AS A CAMPAIGN TOOL

MDP parliamentarians accused the opposition parliamentarians of deliberately stoking up public fear over the new virus to discredit the government and rile up support for their campaign for the upcoming local council elections.

Deputy Speaker, North Galolhu Eva Abdulla said that while the former government had concealed information and deceived the public, the current government would not.

Eva said that the government, despite the opposition’s allegations which said otherwise, was well-prepared for a potential outbreak in Maldives.

Ungoofaaru MP Mohamed Waheed said that while he was a firm believer in actively seeking out information, the opposition was deliberately stoking up public fear as a campaign tool.

He said he hoped to see a more mature and competitive opposition movement appear in Maldives in the future.

South Galolhu MP Mickhail Naseem said that the opposition needed to rethink their decision to use such an alarming health emergency as a campaign tool.

“It’s all well and good to bring an issue to the government’s attention. But I continue to stress that public health emergencies are not for use as campaign tools for council elections,” he said.

THREAT TO INFECT THE OPPOSITION WITH THE VIRUS

North Thinadhoo MP Abdul Mughni, also, expressed confidence in the government’s preparedness in response to a potential outbreak in Maldives.

He said that his constituency, Thinadhoo, was also prepared for the virus.

“We are, In Sha Allah, embarking on our tour of Huvadhoo Atoll today, equipped with the information regarding this virus and equipped with some of the cures for this virus,” said Mughnee.

He was interrupted by a parliamentarian who pointed out that a cure had yet to be found for the disease, but continued with his statement.

“No. We will go with the cures, as in all the information regarding hygiene measures and everything. We are going with all the necessary information. We will do this tour and we will win this campaign, this election by infecting you [the opposition] with coronavirus,” said Mughni.