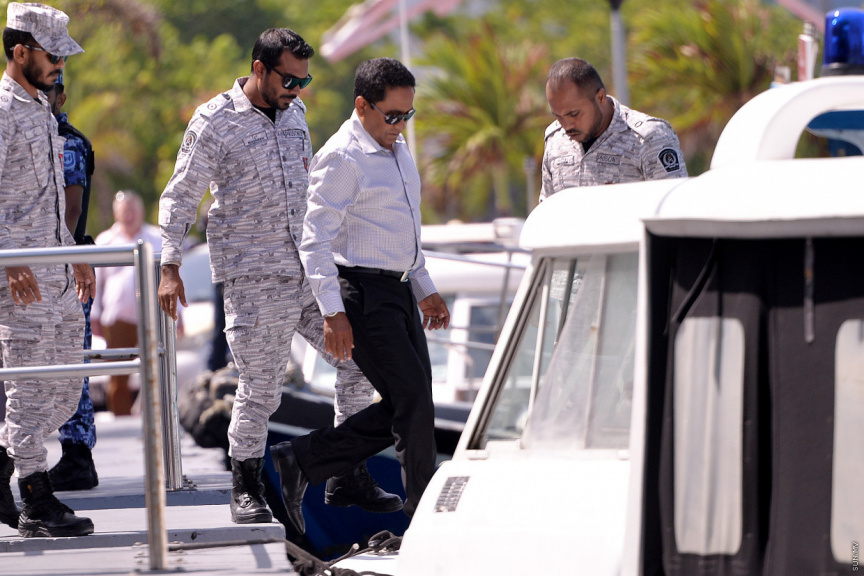 Former President Yameen is seen boarding a speedboat of Corrections Services to be taken back to prison after a court hearing in his appeal case on January 28, 2020. (Sun Photo/Fayaz Moosa)

Jailed former president Abdulla Yameen’s defense team has stated that the prosecution witnesses in the case had been given the opportunity to coordinate their statements made against him in the money laundering trial heard in the Criminal Court late last year.

Witnesses presented to the court against the former president include the vice president during his administration Ahmed Adeeb, former vice president of Anti-Corruption Commission Muavviz Rasheed and former Managing Director of MMPRC Abdulla Ziyath.

Yameen was found guilty of the money laundering charges and sentenced to five years in prison. The case was appealed to the High Court in December last year.

A total of 75 points were presented to the court in the appeal case today.

The defense also noted that according to the Escrow agreement for the state to obtain the funds deposited to Yameen’s account, it was not possible to deposit the funds. The money in question was in an inaccessible general investment account. It was also ordered by the ACC to not conduct any transactions with the money, noted the defense.

The fact that the money was deposited by other means also showed the good intention of Yameen despite the purpose of the Escrow agreement not stating any specific funds to be deposited.

The defense then noted that Yameen was accused of money laundering and providing untrue information. So, charges could not be levied from a crime that Yameen was not questioned about in the investigation.

The judge in the lower court hearing had also noted points not presented by the state, according to the defense which attributed this to a possibility that the judge had an interest in the case.

The crime of money laundering was not specified, and neither was the time and place of the crime when Yameen was charged, according to the defense before adding that the points of the defense were not fully considered when the case was concluded. The state had also failed to prove that the money that was deposited to Yameen’s account was, in fact, the acquisition costs of G. A Vodamulla.

The next hearing on Thursday will see the state respond to the points made by the defense.

The 75 points presented by the defense in the case is an unusual amount for an appeal case at a higher-level court. The hearing today was attended by close aides of the former president and a large number of his supporters that gathered near the Supreme Court area.