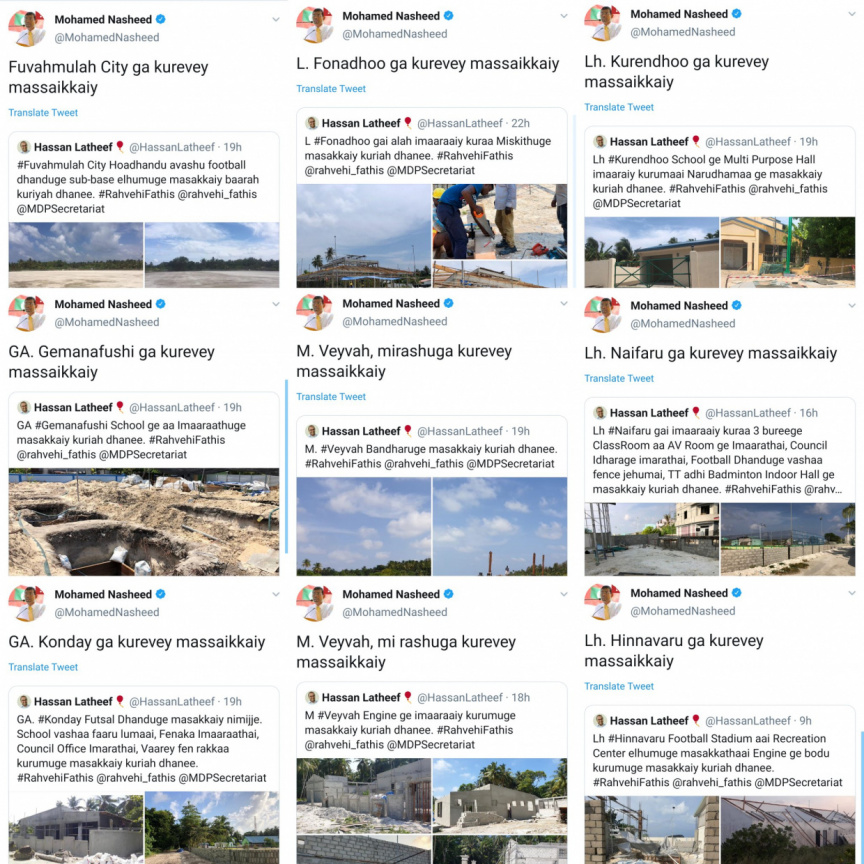 Combined photo of social tweets by MDP senior leaders. MDP went on a twitter stream to showcase infrastructure development projects in the country on March 1, 2020.

Critics of the former administration now in power had repeatedly said that development is not supposed to come in the form of concrete.

They were not “okay” with the “concrete” development underway by the former administration.

A year and a half later, the tables have turned today, and the critics of yesterday are now in power today. PSIP projects have been initiated and are underway in several islands, including some of the works initiated by the former administration.

The sound of development projects all over the country has all of a sudden begun reaching the ears of the people. Projects of futsal grounds, multi-purpose buildings, sports complexes and classrooms in schools are being showcased on social media all of a sudden.

This is the rhetoric of the figures who had consistently maintained that the futsal grounds and other projects were not what the youth desired. The figures behind the slogan of “concrete development is not true development” have a new theme on their social media feeds.

Their feeds are but all covered with infrastructure development projects underway across the country. Posts by the hour of photos and projects are now being posted by these very figures.

The biggest voice of all is West Henveiru MP Hassan Latheef who is also the chairperson of MDP. Not known for his twitter uninterrupted twitter streams, MP Hassan Latheef is now taking the social media campaign of the governing party by the scruff.

Almost every tweet by MP Hassan Latheef is being retweeted by his party supporters.

Retweeting almost every tweet of MP Hassan Latheef is no other than former President Mohamed Nasheed who is the president of MDP and the current speaker of Parliament. Nasheed’s twitter feed is full of “concrete development” pictures today.

The shift in rhetoric is a result of the huge rally of opposition supporters held during the weekend. Activists and supporters of MDP have become more vocal after the rally.

Why? most would attribute this social media campaign to the fact that the turnout for the MDP rally a few days before the opposition rally was strikingly low for MDP’s standards. Defending the government and showcasing the hard work of the government is now the target.

Even the President’s Office is circulating the latest updates of the projects across the country.

Foreign Minister Abdulla Shahid questioned the public about whether there was a reason to vote for the opposition after he released video footage of former President Abdulla Yameen speaking about decentralization on twitter.

The former President had stated on a debate stage for the last presidential election that he did not believe that the decentralization system currently in the Maldives was right.