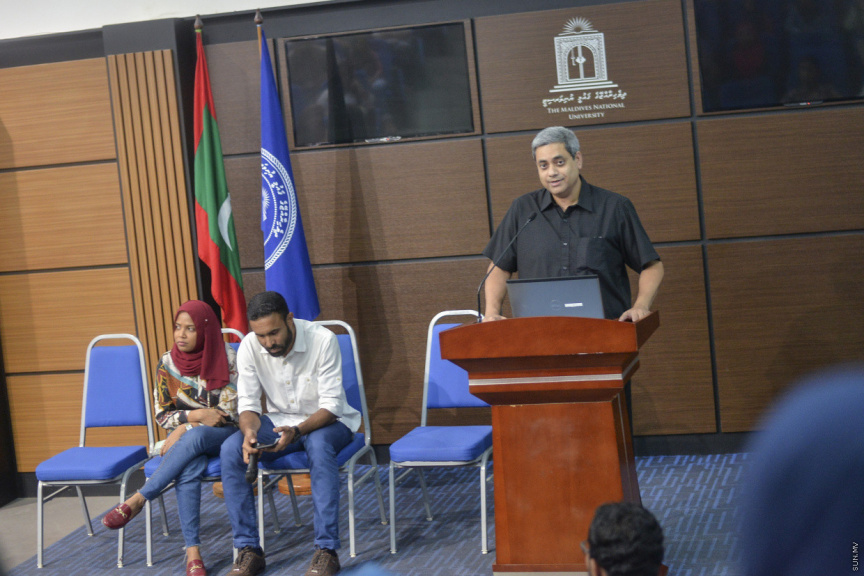 Maumoon Hameed at the first annual general meeting of the Bar Council of Maldives on February 28, 2020. (Sun Photo/Ahmedulla Abdul Hadi)

Bar Council, on Friday, announced it intended to establish a Lawyers Fund for Client Protection which will be used to compensate legal consumers who suffer harm due to dishonest conduct by their lawyers.

The announcement was made by the head of Bar Council, Maumoon Hameed, at the council’s first annual general meeting which was held at the Ghiyaasuddin International School.

Maumoon said that the establishment of the Lawyers Fund for Client Protection would serve to improve the accountability of lawyers who engage in misconduct, and would also serve to preserve the integrity of the bar.

“This will establish a mechanism to mitigate the adverse effect which arise from misconduct,” said Maumoon.

He next highlighted on the work planned by the council for the year; organizing a national moot court competition, registration of law firms, research for bar exam, and drafting of a guideline on ethical conduct of lawyers.

He said that it was unjust that the law, which offered concessions to practicing lawyers, was posing such major challenges to future lawyers.

“We need to consider this; isn’t it their right to be awarded concessions to the extent [that current practicing lawyers have been awarded] since they are being denied access to this fraternity? I want everyone to put deep thought into this,” said Maumoon.

He also said that he was working on minimizing the State expenditure on the Bar Council.

“We are working on minimizing the State expenditure on the Bar Council. We are targeting gradual reduction year by year,” said Maumoon.