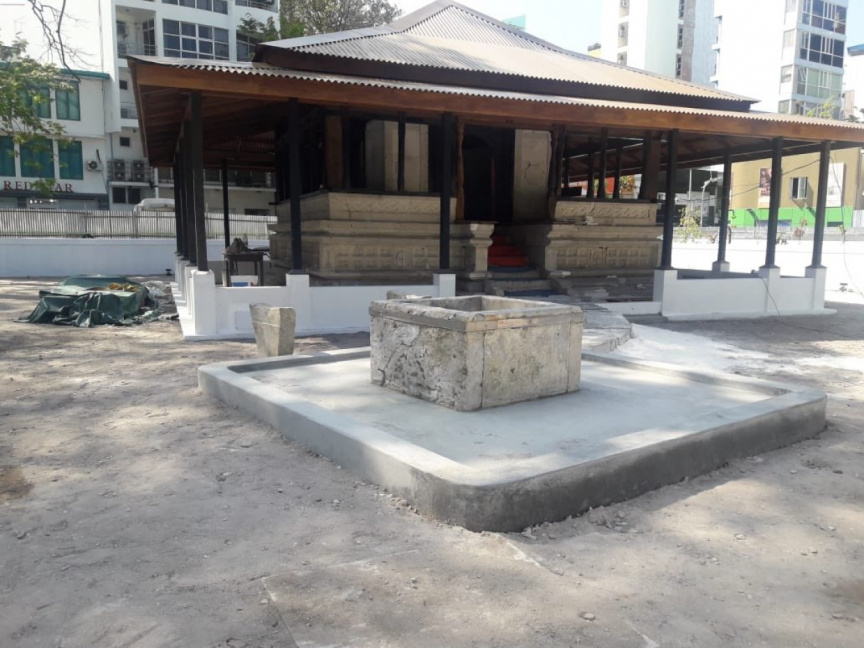 The Kalhuvakaru Mosque built in 1789, is viewed by many as an important historic site of the Maldives. (Photo/Heritage Ministry)

The famed Kalhuvakaru mosque has been reconstructed at the site of the former head office of Dhiraagu.

Currently, it is understood that the decoration works around the mosque are underway, after which the interiors of the mosque will be cleaned.

A special ceremony honored by the President Ibrahim Mohamed Solih is expected to be held for the opening of the mosque.

The mosque is being developed as a living heritage site and an exhibit of the National Museum which is located close by. Even though the mosque will not be used for congregational prayers, worshippers will still be able to pray at the mosque.

Newly assembled Kalhuvakaru Miskiy literally Blackwood Mosque (because of the ebony used in the main woodworks of the mosque.) It was built in 1789 (during the reign of King Hassan Nuraddin I) with coral blocks. This is the fourth place it's been assembled during past 231 years. pic.twitter.com/fkBvNfiO9f

What happened to the mosque?

The heritage site was first located in the North West junction of Majeedhee Magu and Karankaa Magu in Male’ city. However, it was auctioned off during the administration of former President Ibrahim Nasir and relocated to K. Furanafushi.

The move was reversed by Nasir’s successor President Maumoon Abdul Gayoom who relocated the mosque once again back to the capital. the mosque was placed in the Sultan Park.

The mosque was once again relocated during the administration of President Yameen, who is the half brother of President Maumoon.

The mosque was moved to develop a winter park in Sultan Park and was dismantled and stored inside a go down of the National Museum.

The move was harshly criticized by historians and cultural experts and enthusiasts.