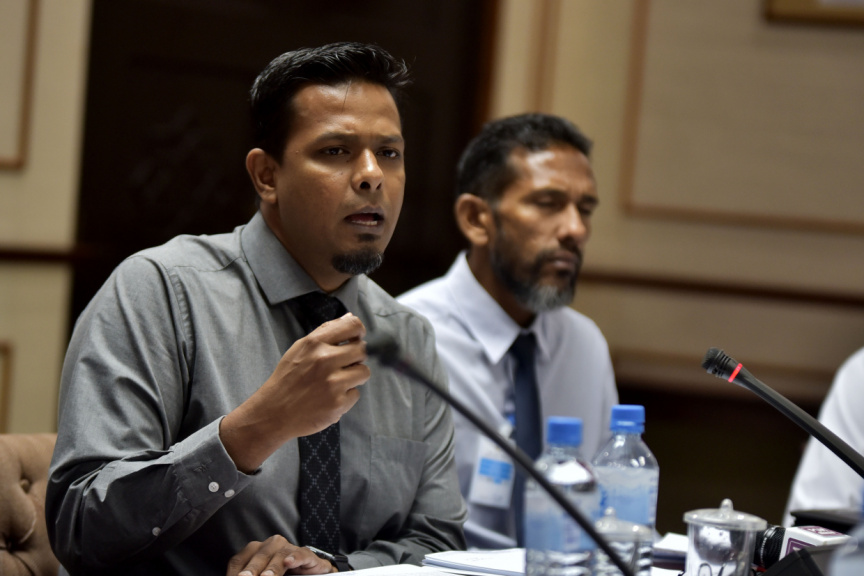 Auditor General, Hassan Ziyath speaks during a meeting of the Budget Evaluation Committee at the Parliament on November 21, 2018. (Sun Photo/Fayaz Moosa)

Auditor General Hassan Ziyath, on Wednesday, recommended that the State seek a legal opinion before making a decision regarding the ongoing seaplane terminal dispute following the claim by Trans Maldivian Airways (TMA) that the Maldives Airports Company Limited (MACL), in a 2017 letter, explicitly stated that its Board had approved space allocation and rental rate for TMA from the new terminal.

Hassan made the recommendation when summoned for a questioning session by the Parliament’s Public Accounts Committee regarding a 2019 audit on the new seaplane terminal by the Auditor General’s Office.

When asked by committee chair, Kinbidhoo MP Mohamed Nashiz whether he had any knowledge of any commitment made by MACL towards TMA. Hassan responded that the audit hadn’t been prepared “from that angle”.

Another committee member probed Hassan about TMA’s claim that it had already leased space for from the new terminal for resorts based on MACL’s written commitment that space allocation and rental rates had already been approved. He was asked whether the Auditor General’s Office had been aware of it when it conducted the audit.

Hassan responded that TMA had only itself to blame for selling something which they didn’t have.

“In this [dispute], MACL itself is saying there hadn’t been a Board decision. Now it’s very sad, but it’s TMA’s own problem if TMA sells something which they don’t have to the resorts. Because, the reality is, they need to have an agreement. They need to have a binding contract with the other party. I don’t believe, that given that had not been the case, MACL or the State should bear responsibility for sales made by TMA,” said Hassan.

Another committee member said he found the possibility of having pay a compensation out of State coffers worrying, and asked again, whether any “firm commitment” had been made which would require the State to pay compensation.

Hassan responded that the term “firm commitment” needed to be legally defined.

“We need to define what a firm commitment is. How we operate companies is the Board needs to decide. It’s with the Board’s decision that the MD receives the authority to negotiate, actually. And once the negotiations are done, there needs to be an agreement. The 2014 agreement with TMA had expired. After which the agreement is being renewed on an annual basis. Therefore, this shouldn’t come as a surprise to either MACL or TMA. MACL didn’t decide to give them [TMA] the new terminal. There had only been negotiations,” said Hassan.

Hassan was lastly asked whether how the dispute is settled had the potential to harm investor confidence in Maldives, and label the Maldivian government a government which disregarded its commitments.

He responded that he felt it would be the best to seek a legal opinion regarding the subject.

“We prepared this report based on the information we received from MACL. There was an offer, and there was a counteroffer. And they are making another counteroffer… I believe we need to seek a legal opinion regarding this,” said Hassan.

The question over whether MACL had made a firm commitment to TMA comes after the seaplane operator, in a statement on Wednesday, said that MACL, in a letter on December 10, 2017, explicitly stated that its Board had approved the allocation of 31,000 square meters of space from the new terminal to TMA at a fixed rental rate of USD 10.35 per square meter per month, and variable charges of USD 5 per passenger.