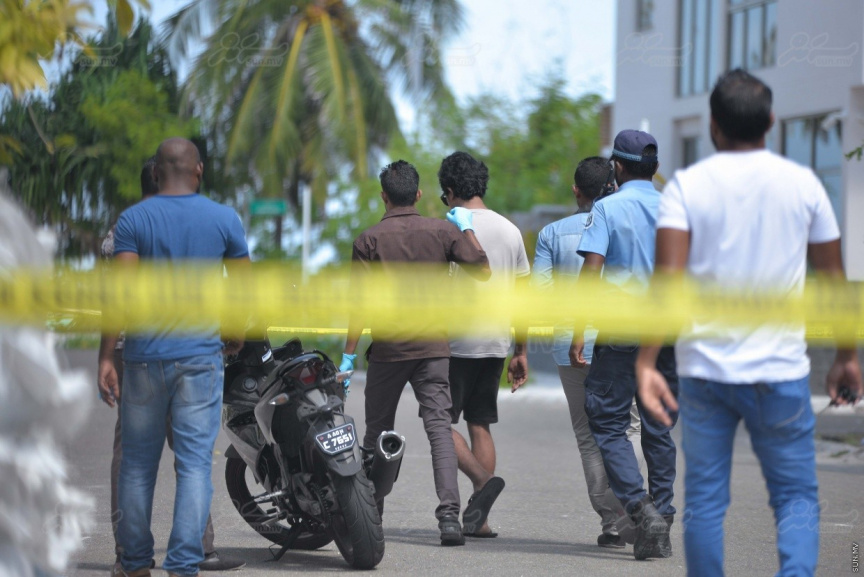 Maldives Police Service, on Thursday, arrested two suspects who are believed to have carried out stabbings in suburban Hulhumale’ which left three injured.

The stabbings, which the police believe to have been perpetrated by violent extremists, had taken place between 7 pm and 8 pm on Tuesday night. It had been carried out by two helmet-clad men on a motorcycle.

The victims of the attack were all foreign nationals; two Chinese men and one Australian man. One of the Chinese men was a tourist, while the other two were expatriate workers. All three are in stable condition.

The police announced the arrest of the two suspects, whose identities have yet to be released, on Thursday morning.

The arrests came within hours after a video emerged on a local Telegram channel claiming responsibility for the attack. The video shows three men standing side-by-side. The man in the center, who has a cloth covering his face, speaks, while the two men on the sides are blacked out with only their silhouettes visible.

He addresses the Maldivian leaders, who he calls “apostates” and says that the attack had been retribution for its crackdown on religious extremism, and that had deliberately targeted the hit on where Maldives was the most vulnerable.

“Your presumption that after deceiving the masses, you can snatch our wives and children from us and dismantle our families and then live in peace is false,” he says.

The police are working on establishing the validity of the video.

The attack had come one day after President Ibrahim Mohamed Solih, in his annual address to the Parliament on Monday, announced the completion of a De-Radicalization and Rehabilitation Center in K. Hinmafushi – built as part of the 2019 amendments to the Counter-Terrorism Act which also included lengthier sentences for acts of violent extremism and terrorism.