Government to submit 56 legislatures in first session of Parliament 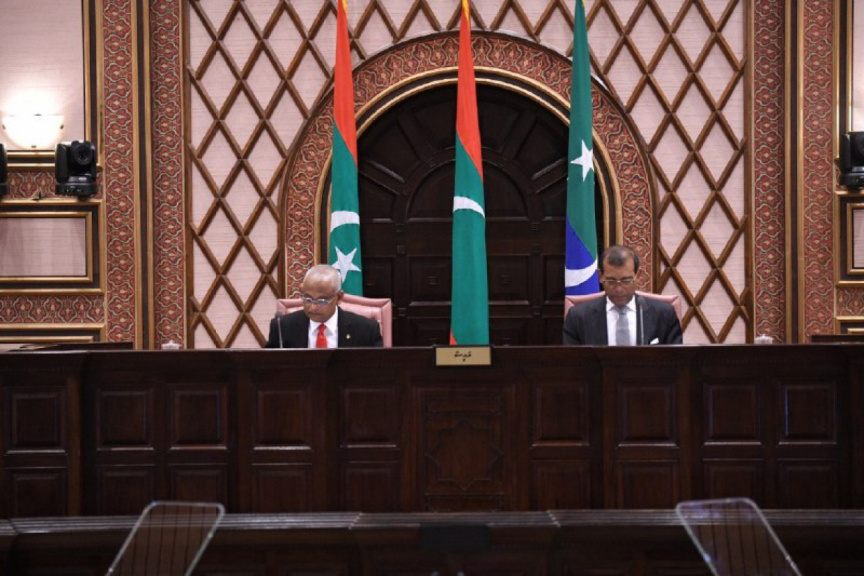 President Ibrahim Mohamed Solih (L) sits alongside Speaker, former President Mohamed Nasheed (R) at the inaugural sitting of the first session of the Parliament for the year 2020 on February 3, 2020. (Photo/People's Majlis)

President Ibrahim Mohamed Solih, on Monday, announced the intention of submitting 56 legislatures to the Parliament during the first session of the Parliament.

The government, last year, submitted 49 legislatures, out of which 27 were passed.

The President had announced the number of legislatures which the government intended to submit, in his annual address at the inauguration of the Parliament for its first session of this year.

“I am sure the honorable Parliament will provide its full cooperation in passing these bills too,” said the President.

He went on to describe the Parliament as his, and his government’s most important partner in directing the execution of the duties of the State along the path which the Maldivian people had shown him.

He said that constitutional and legislative reforms which had been effected through the Parliament had been instrumental in paving the path to good governance, and the secret behind the peace and security which the Maldivian society now enjoyed.

The President said that his one-year government, and the eight-month 19th parliamentary assembly, had served as an example of how the three powers of the State could and should work with independence, while supporting, and serving as instruments of oversight over one another.

“Upholding these democratic values is of direct benefit to the general population. The benefits to the people can only increase if the powers of the State worked within its jurisdiction and with attentiveness towards fulfilling its respective duties,” he said.