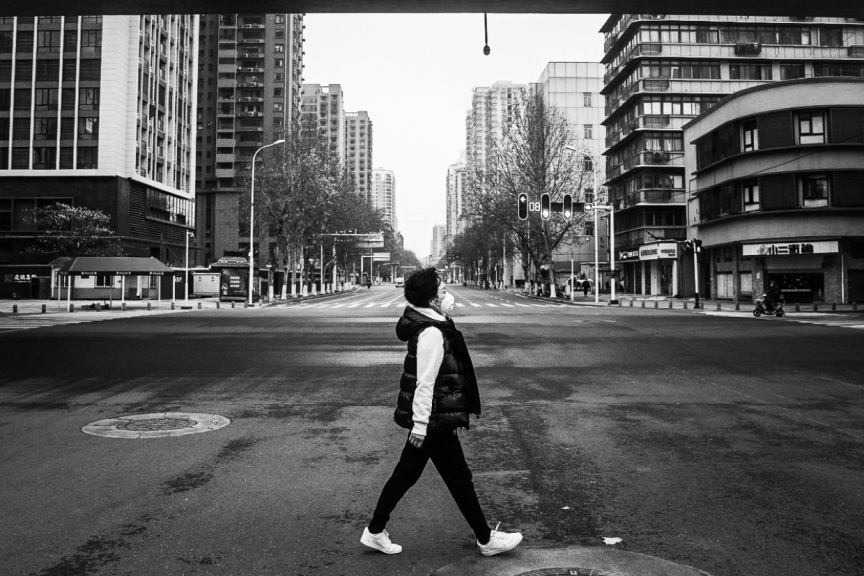 Photo shows a pedestrian walking on the street of Wuhan city, China. The novel Coronavirus emerged in the city in December of 2019.

The government of Maldives has decided to suspend direct flights between the country and China and announced that a travel advisory against traveling to China and countries where cases have been tested positive.

At a news conference in the President's Office today, the Coronavirus Prevention Cordination Committee including Health Minister Abdulla Ameen, Tourism Minister Ali Waheed and Foreign Minister Abdulla Shahid revealed the decision to suspend travel between the Maldives and China.

The travel advisory will request Maldivians to not to travel to countries from where cases for the disease have been spotted unless for emergency purposes.

Tourism Minister Ali Waheed stated that the decision to suspend the direct flights came after discussions were held with the industry stakeholders.

Direct flights between China and the Maldives are operated by national carrier Maldivian and China Southern Airlines. Tourism Minister Ali Waheed stated that 954 booking by Chinese tourists to the Maldives will be cancelled due to the precautionary measures taken by the Maldivian government today.

"The decision is precaution taken for the safety for Maldivians and all visitors to the country. The cooperation and support of tourism industry stakeholders are with the President's decision to take these steps." said Minister Ali Waheed.

He also stated that he was confident that there were no cases of the virus from Chinese tourists that arrived in the country. The Minister stated that any suspected cases were screened and confirmed as negative for the virus.

"The Chinese tourists that came to the Maldivea are here in the country only after being screened and ensured that they are not carrying the virus. I have no doubts over that." said Minister Ali Waheed.

Islamic Ministry also announced the decision to read Qunoot-e-Nazilah during daily prayers held in local mosques to pray for protection from the outbreak of diseases including the novel coronavirus.

“Resorts have the capacity to deal with suspected cases. The picture is now how it is perceived. The recent audit carried out under the instructions of the President also showed this. So, resorts are also prepared for such a situation.” said the Minister.

Training has been conducted and instructions regarding suspected cases have also been sent to other atolls, according to Health Minister Abdulla Ameen, who assured the citizens that the Maldives was very much prepared for a case of the virus.

A quarantine facility has been established in Hulhumale’ and an isolation facility has also been designated in the Velana International Airport. A special ICU unit has also been prepared for a case of the virus in Dharumavantha Hospital in Male’ city.

The virus has spread outside of China, with cases being reported in countries including Thailand, South Korea, Japan, Cambodia, Malaysia, Singapore, the United States, Canada, France, Germany, Sri Lanka and Australia and most recently India and Philippines. Around 170 deaths from the outbreak has so far been reported, all in mainland China, with infected cases numbered at more than 7000 throughout the world.

Suspected case of Coronavirus in the Maldives