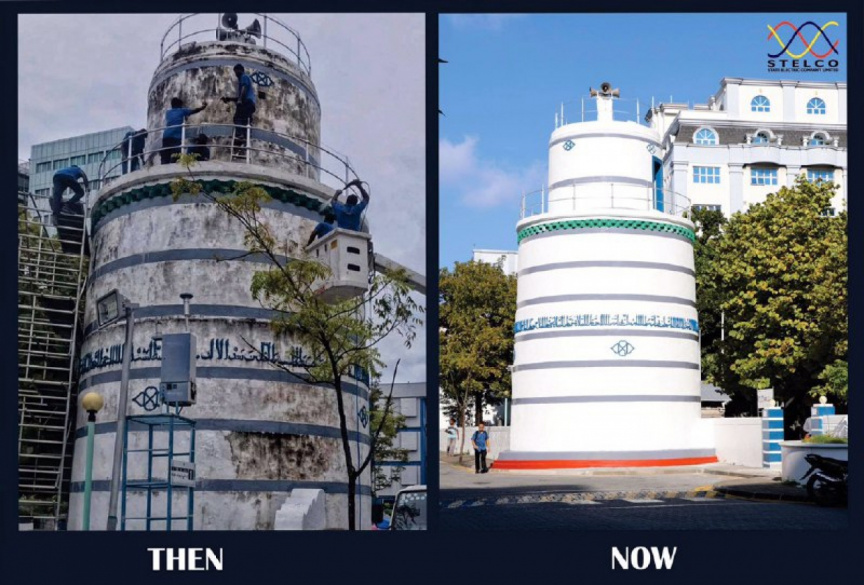 The left side photo shows the Friday Mosque's Minaret before a restoration project by Stelco. The photo on the right, is the minaret after the project concluded on January 28, 2020. The Friday Mosque Minaret is an important landmark in the country. (Photo/Stelco)

Efforts by Stelco to clean the famous Friday mosque minaret have been finished with the minaret looking new and clean.

The Ministry also assigned Stelco to clean and renovate the wells inside the mosque. The agreement between the Ministry and Stelco which runs for four years was commenced with the cleaning of the minaret in December. The minaret had been in poor condition when Stelco began the work.

At a ceremony to celebrate the end of the minaret project, Heritage Minister Yumna Maumoon thanked Stelco staff involved and management for the careful and important work. She stated that Stelco was awarded the project since it was a hundred percent Maldivian company and would be committed to the work as if it was a project of their own. She also praised the work of Stelco in cleaning the minaret.

Deputy Managing Director of Stelco Ali Azuwar stated reiterated the Minister’s statement by saying that Stelco’s project with the wells and minaret would be carried out with the view that it was a project of the company. He also thanked everyone involved in the project.