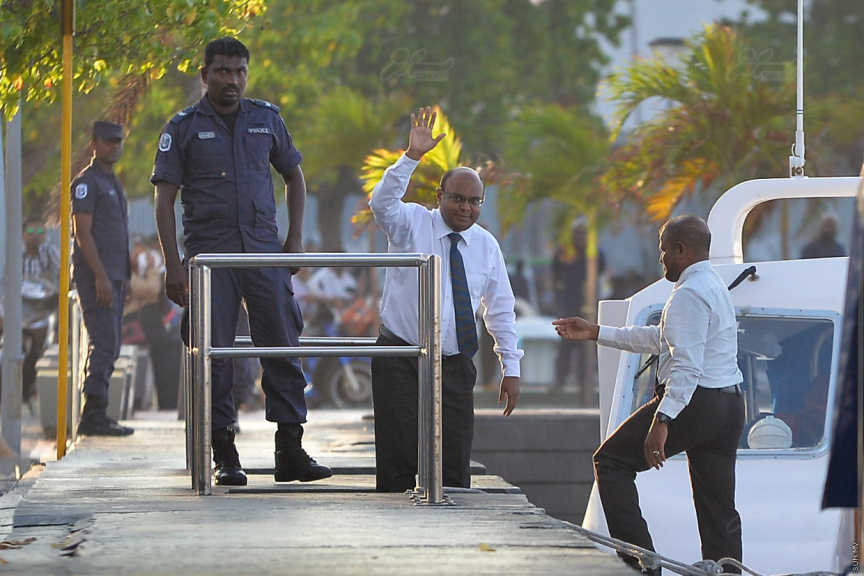 Former Chief Justice Abdulla Saeed is seen waving towards the camera as he boards a speedboat to take him to prison. Saeed was freed by the High Court on January 27, 2020 after a lower court had found him guilty of obstruction of justice. (Sun Photo/Mohamed Afrah)

The High Court of Maldives has quashed the verdict by a lower to the court that found former Chief Justice Abdulla Saeed guilty of obstruction of justice.

The former Chief Justice was found guilty after he failed to hand over his mobile phone to the authorities. A verdict by the lower court had found that Abdulla Saeed was guilty of obstruction of justice after charges were brought by the state.

The former Chief Justice is now a free man after the verdict was overruled.

The Criminal Court of Maldives sentenced the former Chief Justice to one year, seven months and six days in prison after finding him guilty. The Chief Justice refused to surrender his mobile phone to the investigation of the authorities after he was arrested in February 2018.

Prison sentences were also handed out by the Criminal Court to the former President Maumoon Abdul Gayoom and Supreme Court Justice Ali Hameed. The verdicts of the two were overruled by the High Court when their cases were appealed.

The case of Abdulla Saeed was appealed in October of 2018. Nine points were noted by the defense in the appeal process and the High Court bench of three judges reviewed the points as well as the court case documents, statements made in hearings before deciding to acquit Saeed unanimously.

The Criminal Court also failed to state how the elements of the crime were fulfilled and the allegation that the evidence on the mobile phone was erased was not proved beyond a reasonable doubt.

The Criminal Court had also ordered in the case to revoke the licenses issued to attorneys and religious scholars and clerics and banned any such work in addition to imprisoning the former Chief Justice. The High Court decision read that the intended purpose for such a decision was not specified by the lower court and was not connected to the original case of Abdulla Saeed, thus leading to the decision that the verdict of the lower court was not a valid one.

The High Court also noted that secret witness statements were taken in violation of the Criminal Procedure Code of Maldives.

The decision was made unanimously by High Court Judges Hussain Mazeedh, Ali Sameer and Mohamed Faisal. The decision has now freed the former Chief Justice Abdulla Saeed who was serving time under court arrest.

HC orders review of case of man traveling to Syria

'Seat allocation for women in LCE not unconstitutional'