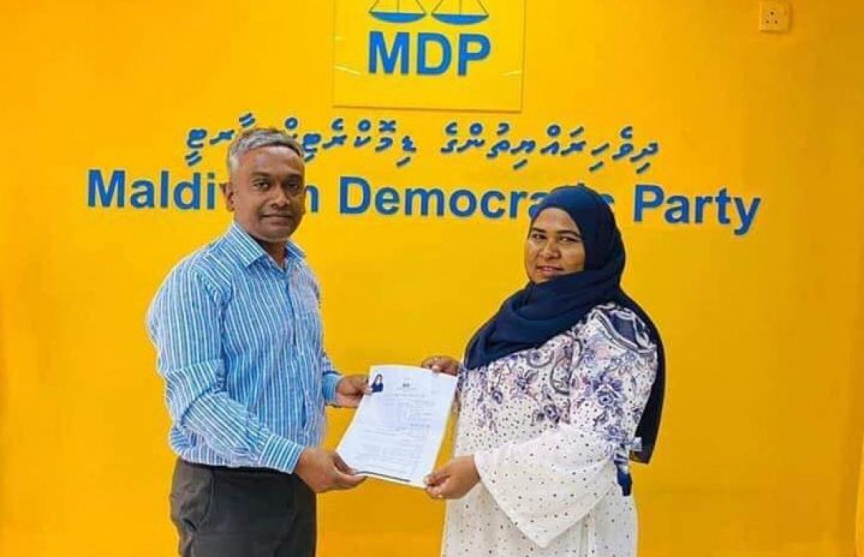 Madheeha Abdulla is seen being awarded her candidacy for the MDP primary in G. A Kanduhulhudhoo for the local council elections scheduled to be held in April of 2020. Social media has gone rife with calls to cancel the candidacy Madheeha after an interview with "Sun" where she defended family members who have been accused of molesting a toddler in G. A Kanduhulhudhoo.

Social media has gone rife with calls to cancel the candidacy Madheeha Abdulla who is running for the MDP ticket in the for the council of G.A Kanduhulhudhoo in the upcoming local council elections.

The calls came after the recent case of a toddler who was allegedly abused by elderly family members that came to light in Kanduhulhudhoo. Three were arrested in connection with the case and included the child’s father, paternal grandfather and paternal great grandfather.

Journalists of the “Sun” that visited the island interviewed several islanders including Madheeha who is the sister of the grandfather who was arrested.

Speaking with “Sun” Madheeha had vehemently defended her brother and said that she believed the victim's maternal family and local media were the reason for the public outrage. She expressed immense displeasure at the statements by the maternal family, and described it as "an act of terrorism".

If you let this one compete in MDP Primaries many including me will lose all trust n loyalty. @MDPSecretariat https://t.co/hh5iml3HOf

"If she was raped by three grown men, would she be running around so joyfully? Would she even be alive? She was released from IGMH after treatment. Would they discharge her if she had been abused so severely?" Madeeha questioned.

I will be voicing to boycott MDP primary if she is allowed to contest in upcoming election. @ali_niya

Madheeha also defended the great grandfather of the toddler who has previous records of child abuse.

After the interview by Madheeha with “Sun” was published, several people on social media have called on MDP to cancel the candidacy of Madheeha. Many stated that Madheeha’s candidacy would lose their faith in MDP and its beliefs. Some went as far as to call for a boycott of the MDP primary on the island.

In today's cancellation list:
1. Madheeha
2. Men who think girls should be circumcised.
3. This FPL week.

A statement by MDP in response read that a party committee would convene in the afternoon to discuss and identify members of the party who have spoken in a manner that encouraged or defended child abuse and those accused of such acts. MDP stated that it remained firmly against child abuse and sexual abuse.