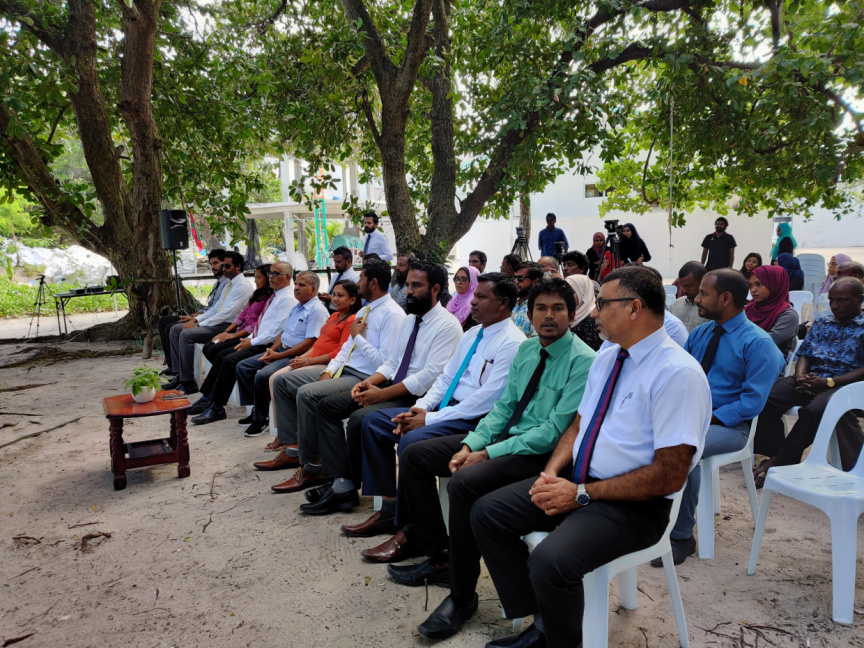 Photo shows attendees of a ceremony to commence a grouper farming project in A. Dh. Atoll on January 12, 2020. (Sun Photo)

The pilot project for grouper fish farming in the country has been commenced in A.Dh. Mahibadhoo today.

At a special ceremony held in Mahibadhoo, the program was commenced by Fisheries Minister Zaha Waheed and the project run under the sustainable fisheries resource development project was attended by people from islands all across the atoll.

The project is aimed at developing the economy, creating income sources through developing a mariculture industry. The project is also the first such project to allow Maldivians to be more involved and gain experience in farming groupers.

The project which will run for 18 months, will train 20 participants from the islands of Mahibadhoo, Dhangethi, Dhigurah, and Omadhoo to rear the fish to market size. The participants will be provided with the food for the groupers which will be farmed in cages out in the ocean.

The participants include five women and 15 men who applied for the project when announced by the Ministry.

Minister Zaha, who spoke at the ceremony stated that this was a costly long-term project and will allow future projects to be better shaped from the aspects noticed from this project.

Citizens of the atoll have high hopes for the project.

“My hope is that because of this project, new employment opportunities are provided to the island and the whole atoll.” said a youth who spoke to the “Sun”. The project would allow locals to work while staying on their home islands, according to him.