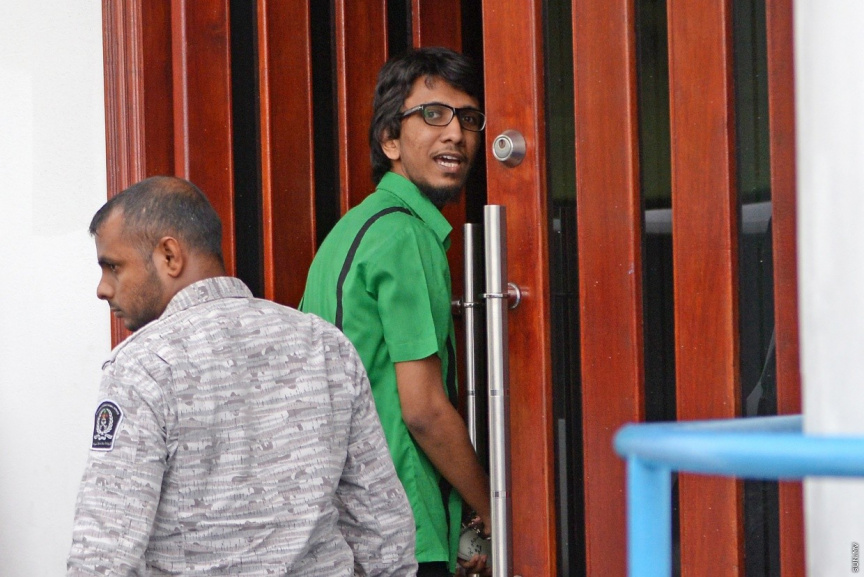 Ismail Haisham Rasheed from H. Annaarumaage is pictured entering the court. Haisham is one of the prime suspects in the murder of blogger Yameen Rasheed. Yameen Rasheed was found cruelly murdered on April 23, 2017.

At a hearing held yesterday for the case of murdered blogger Yaamin Rasheed, the defense decided not to take the statements of some of their witnesses.

Ismail Haisham Rasheed stated in yesterday’s trial that he did not wish to present the statements of any witnesses presented on his behalf.

Ahmed Zihan Ismail stated that he did not wish to present any witnesses on his behalf except one. The defense lawyers stated that the decision was because the witness statements would not help their case in proving the innocence of their clients.

Maumoon Hameed, a defense lawyer for Ismail Rasheed had previously stated that out of the 11 witnesses presented on behalf of his client, the statements of seven would not be taken because the state had failed to present enough evidence to prove the murder.

Maumoon Hameed had asked for the court to summon a former PPM council member Zaahidh Rameez as a witness. Judge Ali Rasheed stated yesterday that an order to summon Zaahidh would be issued once the contact details of the client were clarified and confirmed.