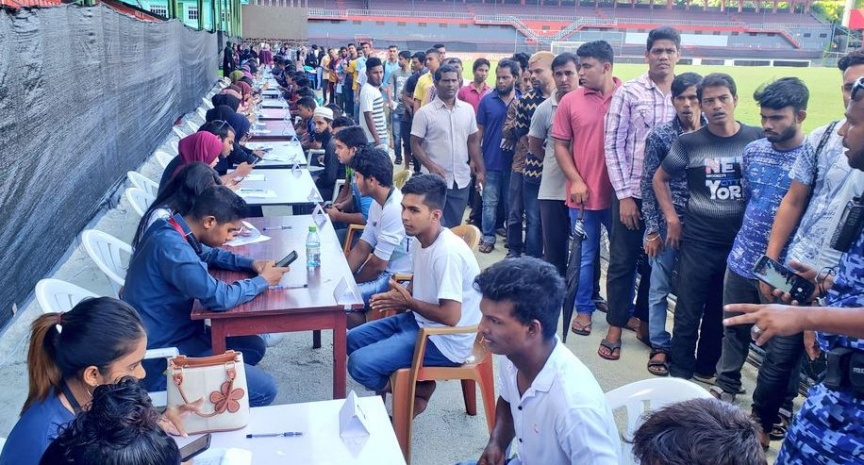 Undocumented expatriate workers at the Galolhu National Stadium as they wait for appointments for Economic Ministry's regularization program on October 5, 2019. (Photo/Economic Ministry)

Economic Minister Fayyaz Ismail has revealed that around 20,000 migrant workers living undocumented in the country applied for the regularization program carried out by the Ministry to address the issue of unregistered undocumented migrants.

The program, which is set to be run for six months in different areas of the country, acts as a second chance for undocumented immigrants to live in the Maldives legally.

The Minister described that missing documents posed a massive challenge to solve what has been described by some of the public as a miniature migrant crisis in the Maldives. The assistance of the Bangladeshi government was being received to resolve the issue, according to the Minister.

Maldives Immigration has previously estimated that there are around 63,000 undocumented immigrants living in the Maldives, which is a large number compared to the 400,000 estimated population of the country.

The Minister announced in a news conference in September that it was imposing restrictions on unskilled labors from Bangladesh from entering into the country for a period of one year.

Minister Fayyaz also stated that only 150,000 unskilled workers can be brought from each country and this number would be currently reached with the number of Bangladeshi migrants already living in the country.

Quota policies have also been shifted by the Ministry. The process along with the changes will be imposed starting from next month onwards and will require a project agreement form.