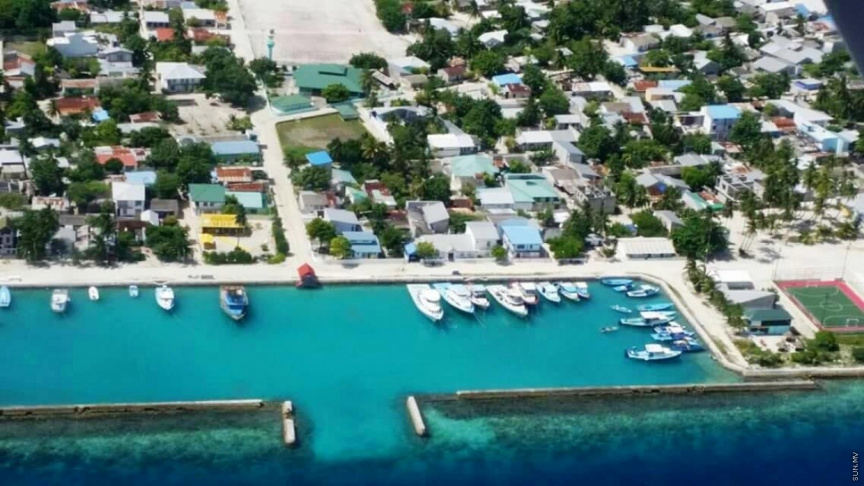 In this aerial shot, the harbor of Maduvvari in Raa Atoll is seen. Police and MNDF commenced a large scale operation to combat religious extremism in the island on December 18, 2019.

“We will reveal all the details of the operation once it is concluded.” said the official.

A Maduvvari council member also confirmed the operation when contacted by “Sun”. The member acknowledged that he was aware of around 30 police officers who arrived on the island early morning, However, he stated that the council was not informed of this operation and had no further information to share regarding the matter.

Police spokeswoman Izmia Zahir informed the media that an operation to search residences in Maduvvari was underway and that the details of the operation will be divulged later on.

Some Maduvvari residents have previously spoken regarding the situation on the island where it was a common sight to see people praying separately, preventing children from attending schools, out of court “marriages” and rejection of vaccinations.

The island was dragged into the spotlight in the recent case of Ismail Hammad (26 yrs), who was from the island. Hammad was stabbed and wounded by fellow crew members on a sea cucumber fishing boat November 22, 2019, following a dispute.

It is alleged that Hammad and his crew harbored extremist religious ideology and carried out robberies in tourist resorts and other residential islands in their travels. They considered the property of others as spoils of war.

Following the attack, Hammad was thrown overboard the boat. He, however, managed to swim in his wounded state to the nearby island of A. A. Maalhos from where he was rescued.

The attack also brought out another issue that was common in the island of Maduvvari, according to residents.

In addition to extremism, out of court marriages and anti-vaccination as well as prevention of education for children was thrown into the spotlight when it was revealed that Hammad had “married” a 13-year old girl from a family with extremist religious ideology from Maduvvari. The case, first reported by “Sun” sparked discussions among the public regarding the spread of such ideology.

The case received even more condemnation by the public when it was revealed that the 13-year old was pregnant from the out of court “marriage”. Authorities also received criticism from the public for its failure to act in the case which was previosuly reported.

The child subject to “marriage” in the case and her siblings had been neglected of education and vaccines by their parents. The 13-year old, the baby that she bore from the marriage and her siblings have now been taken into state custody. Her parents have also been arrested by the authorities.