Minister Aslam: Male’-Thilafushi Bridge expected to be completed by 2023 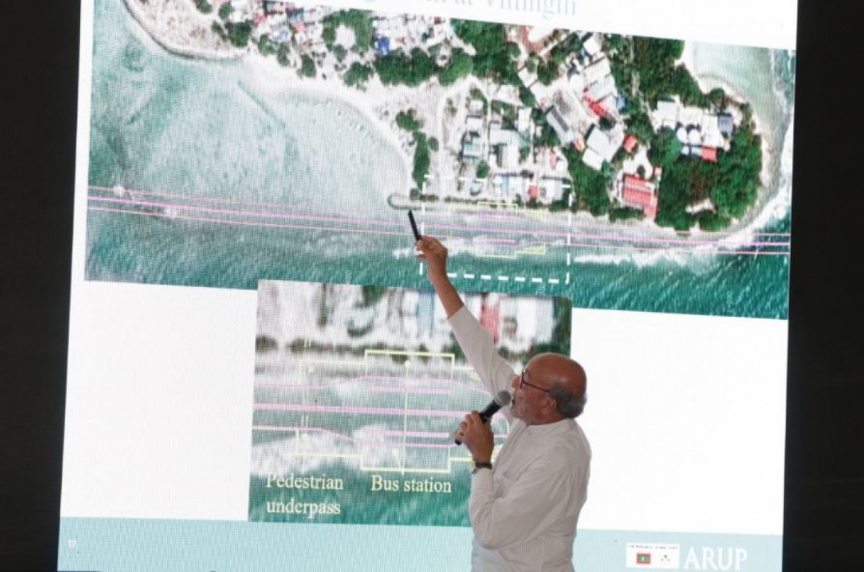 December 15, 2019; Photo shows a presentation of the project to construct a bridge between Male', Villigili and Thilafushi. Planning Ministry held a conference regarding the project in Dharubaaruge. (Sun Photo/Fayaz Moosa)

Planning Minister Mohamed Aslam has stated that work will commence on the project to build a bridge between Male’ and neighboring Thilafushi next year.

Minister Aslam was speaking to reporters at Dharubaaruge after concluding a conference on the subject when he stated that the project will be started next year after the government concludes all the procedures of planning the project.

“We hope that official work on the bridge will be started next year. We are now working to prepare for the design works and tenders of the project.” said the Minister.

The Minister also stated that before this, discussions with experts for the project needed to be held and that the process was now ongoing. A presentation of the discussions was displayed at the conference held in Dharubaaruge.

Some of the unfinished topics include the questions surrounding the width of the lanes on the bridge, traffic limitations starting from Villingili, Parking lots for vehicles in Villingili and discussions around the Gulhifalhu stretch.

“It is decided that the bridge will be built by installing columns and not like a cable bridge. The alignment of the bridge from Male’ to Villingili and the alignment from Villingili to Thlafushi is also nearly complete.” said the Minister. He also stated that the government had no thoughts to change Villingili into a drivable island. Currently, private vehicles with engines are not allowed in Villingili.

The bridge named as “Greater Male’ Connectivity Bridge” is expected to be completed by 2023 and will connect Male' city, Villingili and Thilafushi.

The Minister also stated that work on the land reclamation project for the international port in Thalafushi is expected to be completed by April of next year.

The government has stated that the total cost of the bridge is expected to be around USD 488 million (MVR 7.6 billion).