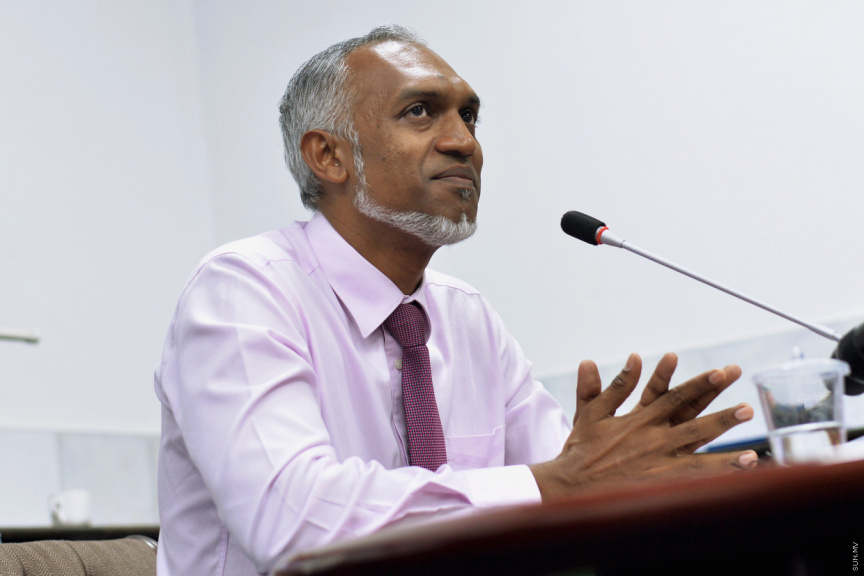 The Attorney General’s Office has lodged an official request with the police for a criminal investigation into the actions of former Housing Minister Dr. Mohamed Muizzu in the arbitration case filed by Noomadi Resorts and Residence AG (Noomadi) against the State.

The AGO, in a statement regarding the case this Monday, said that while Dr. Muizzu had testified on behalf of Noomadi and against the State during arbitration, he had previously defended the State in the same case during his time at Housing Minister.

The AGO said that Dr. Muizzu, in his capacity as Housing Minister, had taken part in the discussions and decisions made regarding the State’s stance and potential defenses when Noomadi filed for arbitration on December 11, 2017.

AGO noted that that he also presentenced contradicting statements,  and that he initially testified that the contract with Noomadi on the Phase I project had been terminated in accordance with the wishes of then-President Abdulla Yameen Abdul Gayoom, but later changed the statement.

It said that the decision by Dr. Muizzu to testify against the State during arbitration had presented significant challenges to the State in making its defense given that he had headed the government institute which had made the decisions regarding the contracts with Noomadi, and had run the projects.

AGO said it had therefore asked the police to investigate Dr. Muizzu’s actions in the Noomadi dispute and his statements during arbitration, and determine whether he had misused his government position, misused confidential information he had been privy to as a government official, or misinformed an official institution.

The dispute between the State and Noomadi had ended with a MVR 845 million settlement to the company.

Dr. Muizzu was recently questioned regarding his statement by the Parliament’s Public Accounts Committee.

He said that his intent in providing the statement had been to clarify the facts due to the false allegations made against him in previous statements.

He said that he had been unaware to whom he handed over his statement, and maintained that his statement had not sided with any party, but had been neutral.

The committee determined that Dr. Muizzu had deliberately misinformed its members, and passed a motion to lodge a criminal complaint with the police.