Nasheed calls for charges against everyone involved in MMPRC scandal 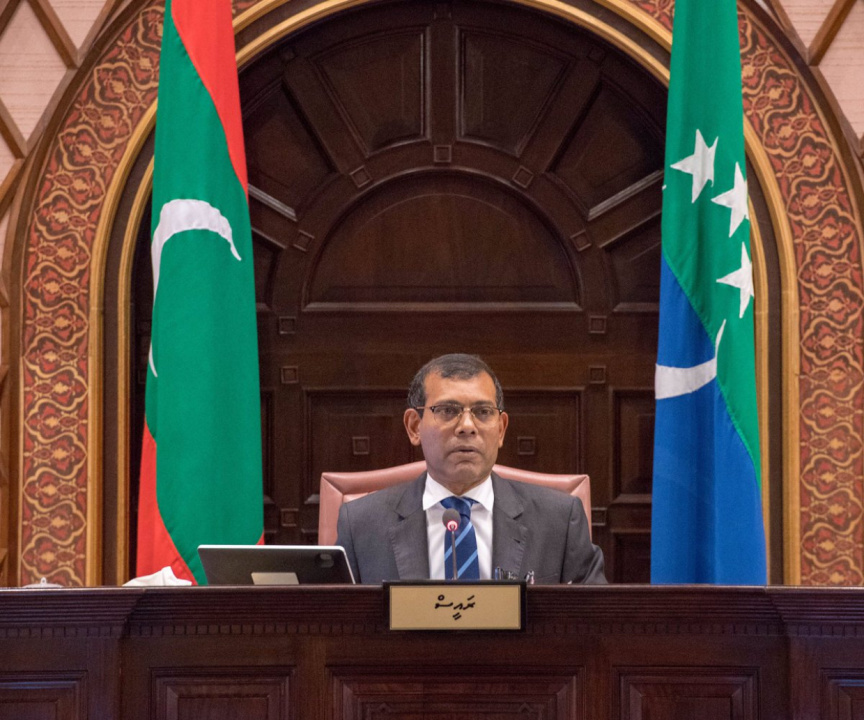 Former president and current speaker of the Parliament Mohamed Nasheed is pictured presiding over a session in the parliament. (Photo/Parliament)

Former President and current speaker of the parliament, Mohamed Nasheed has called for charges to be brought against everyone involved in the MMPRC scandal.

The scandal, the biggest in the history of the country saw some MVR 3.3 billion misappropriated, was taken part by senior government officials, former and current MPs as well, and Nasheed’s statements were in regard to Dhuvaafaru MP Ismail Mohamed’s statements expressing concern for the long delay of obtaining the list of people involved in the scandal from the Asset Recovery Commission. He called to speed up the process and also to recover the money.

“I respectfully ask the Asset Recovery Commission, PG Office and the Police to bring charges swiftly against those involved in the MMPRC scandal,” said Nasheed, who claimed that his party MDP had been directly involved and helped in the investigation. Nasheed also said that the authorities would be fully aware of those who received payments from the scandal.

“When the laptop and phone of former Vice President Adeeb were taken, these items were handed over to a forensic accountant. The report by the accountant was submitted to the Attorney General and chairperson of MDP. The AG then handed over the report as it was to the Asset Recovery Commission,”

“Not even the Police could say that the delay is because the case is under investigation. This is being said by someone who knows the case very well,” said Nasheed who also stated that the report was a very detailed one.

A news conference by Police, Asset Recovery Commission members and Anti-Corruption Commission members in October saw the authorities reveal that 16 current MPs and 42 MPs of the previous parliament had received payments from the MMPRC scandal without revealing their identities.

Only three people have so far been charged in the scandal. They are former President Abdulla Yameen, former Vice President Ahmed Adeeb and the former Managing Director of MMPRC Abdulla Ziyath. Out of the three, only former President Yameen has so far been found guilty. He is currently serving a five-year sentence for money laundering.

Nasheed: Only MDP can run a decentralized Maldives

''Coalition to be blamed for lack of MDP's fair share''

''Prisons are fortresses of extremist recruitment''