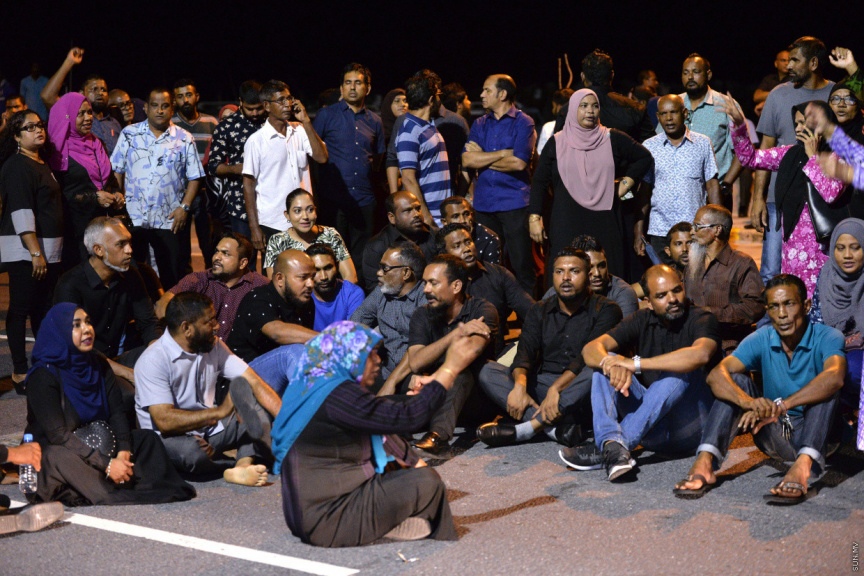 The opposition, PPM-PNC coalition staged a protest outside the Male’ Jail on Friday night demanding the release of former Maldivian President Abdulla Yameen Abdul Gayoom who has been sentenced to five years in prison for money laundering.

The former president is being held at the Male’ Jail pending the results of his medical examinations.

The opposition gathered outside the Male’ Jail following a joint-council meeting earlier on Friday night during which it passed a motion to go into civil disobedience and hold nightly protests in Male’ until President Yameen is released.

It also passed a motion to hold similar protests across Maldives.

Last Friday’s protest has immediately disbanded by the police.

Three protesters were taken into custody of the police, but released a few hours after.

PPM councilmembers and spokesperson, Heena Waleed told Sun that two protesters were injured and taken to the hospital.

President Yameen was charged with money laundering based on an USD 1 million transfer from SOF Private Limited – the company accused of laundering money embezzled from MMPRC - to one of his personal bank accounts.

The State alleged the USD 1 million had been the acquisition cost due to MMPRC for the lease of G. A. Vodamula. He was accused of laundering the money for personal gain and attempting to hide its origins.

The Criminal Court issued its sentence in the high-profile case on Thursday, November 28.

It found President Yameen guilty of money laundering, and sentenced him to five years in prison and ordered him to pay a fine of USD 5 million.

The verdict had been unanimous.