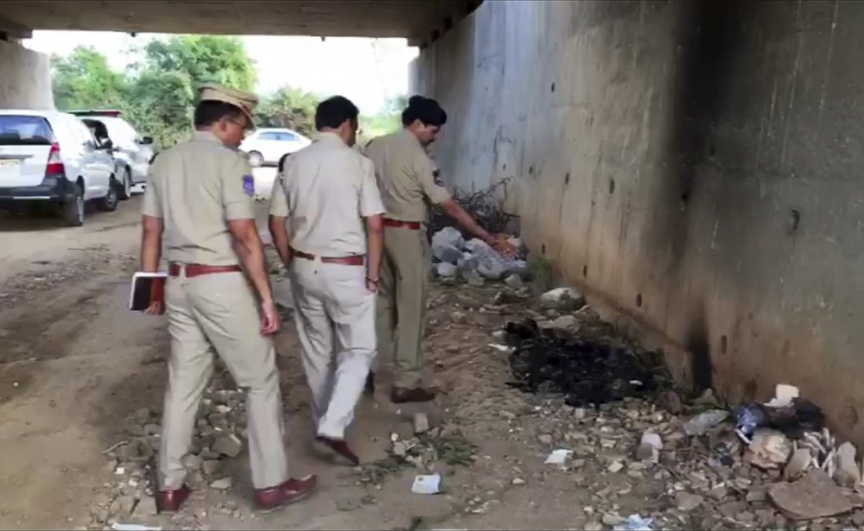 In this frame grab taken from video provided by KK Productions, Indian police officers inspect the site where they found the burned body of a 27-year-old veterinary doctor who they say was raped and killed on the outskirts of Hyderabad, India, Friday, Nov. 29, 2019. (KK Productions via AP)

HYDERABAD, India (AP) — Police said they detained four suspects for questioning Friday after finding the burned body of a 27-year-old veterinarian who was raped and killed in southern India, in yet another instance of violent crime against women in India.

The woman went missing on Wednesday night and her body was found by a passer-by in an underpass on the outskirts of Hyderabad, the capital of Telangana state, Police Commissioner V.C. Sajjanar said.

Police said the suspects allegedly offered to fix a flat tire on her motorbike and then took her in a truck to a secluded spot where the crime was committed.

She made a last phone call to her sister saying her bike had broken down and she was scared because some people sitting in a truck were staring at her, Sajjanar said.

Surendar, another police officer who uses one name, said her body was wrapped in a blanket and set on fire in the underpass.

India has been shaken by a series of sexual assaults in recent years, including the gang rape and murder of a student on a New Delhi bus in 2012.

While the government has passed a series of laws increasing punishment for rape, it’s rare for more than a few weeks to pass without another brutal sexual assault being reported.

In 2013, India doubled prison terms for rapists to 20 years and criminalized voyeurism, stalking and the trafficking of women.

Indian lawmakers also voted to lower the age at which a person can be tried as an adult for heinous crimes from 18 to 16.

According to the most recent available official crime records, 38,947 women were raped in India in 2016, including over 2,000 girls younger than 12. Overall in 2016, 338,954 girls and women were subjected to crimes like molestation, kidnappings and cruelty by husband or relatives.