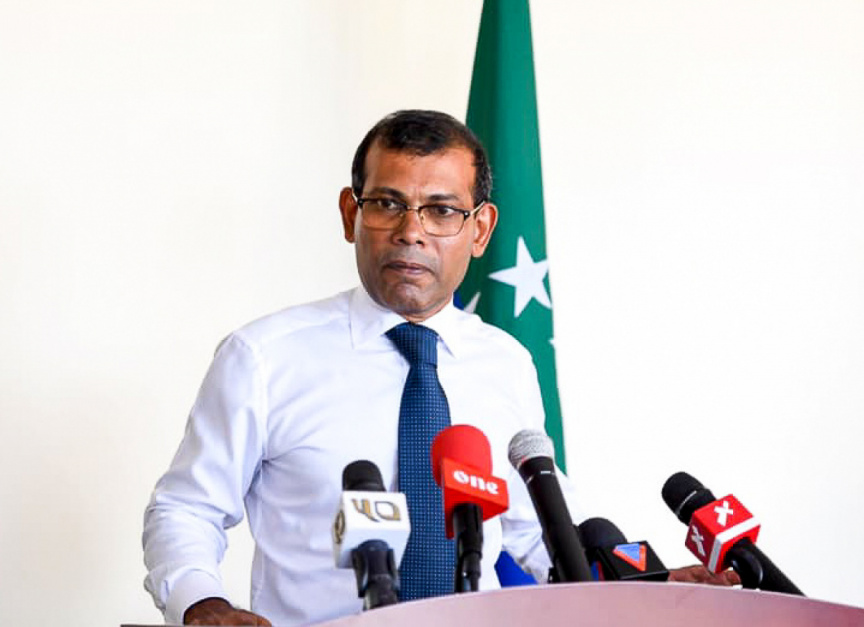 Speaker of Parliament, former President Mohamed Nasheed warns that several officers within the nation’s security forces have embraced the teachings of a ‘sinister network’ of religious extremists.

Nasheed, issued the warning at the inauguration of the Seminar on Juvenile Justice System this Sunday.

He referred to the case of a 26-year-old man – an alleged religious extremist - who was recently found to be engaged in an illegal child marriage to a 13-year-old girl, and accused security services of negligence in investigating such cases.

Nasheed said the Maldivian security services would have never overlooked a child abuse case 50 years back.

“I don’t believe anyone, whether a district in-charge, a person of nobility, or the sultan himself would have remained sleeping if a child were being abused 50 years back. Without looking into it, without investigating it, without stopping it,” said Nasheed.

He said that the security services, today, were negligent in investigating such cases due to a shift in their perspective.

“It’s due to this shift is perspective that carelessness, negligence, and disregard is becoming evident from within the police and the military,” said Nasheed.

He said that the security services, when questioned, would claim the investigation was going well, but that the reality was a whole different matter.

He said that the failure in stopping child marriages was not due to lack of legislature, but due to religious radicalism.

“It’s not because we lack legislature or because we lack a conscience. It’s not that we don’t know what’s right. A philosophy has spread. A belief, a philosophy has come into being. A group of people have risen to change the Maldivian's way of life. This is a battle of faith. This cannot be stopped by writing a piece of legislature,” said Nasheed.

He said that the police and military were refusing to investigate this ‘sinister network’ because they themselves were embracing its views.

“Those in charge of maintaining our security, those in charge of our interests are overlooking these cases because they are turning towards this other philosophy. They have pledge allegiance to the sinister network,” said Nasheed.

Disappearances and Deaths Commission (DDCom)’s investigation into high-profile murders which have taken place in Maldives uncovered evidence of the existence of local religious extremist groups aligned with international terrorist organizations such as the Al-Qaeda and the Islamic State (IS). Nasheed has coined such extremist groups as a ‘sinister network’.

The issue the continued practice of illegal child marriages came to the forefront after a 26-year-old fisherman from R. Maduvvari was discovered stabbed and thrown overboard following a disagreement the rest of the crew in the early hours of Friday. It was later discovered that all crew members of the local fishing boat – which specializes in sea cucumber fishing – were religious extremists, and that the victim of the attack was engaged in a child marriage with a 13-year-old girl. The child in question is now under the custody of her mother. She gave birth to a child last week.

Maldives sets 2M as its tourist arrival target for 2020