Nasheed: Failure to stop extremism will be the ruin of Maldives 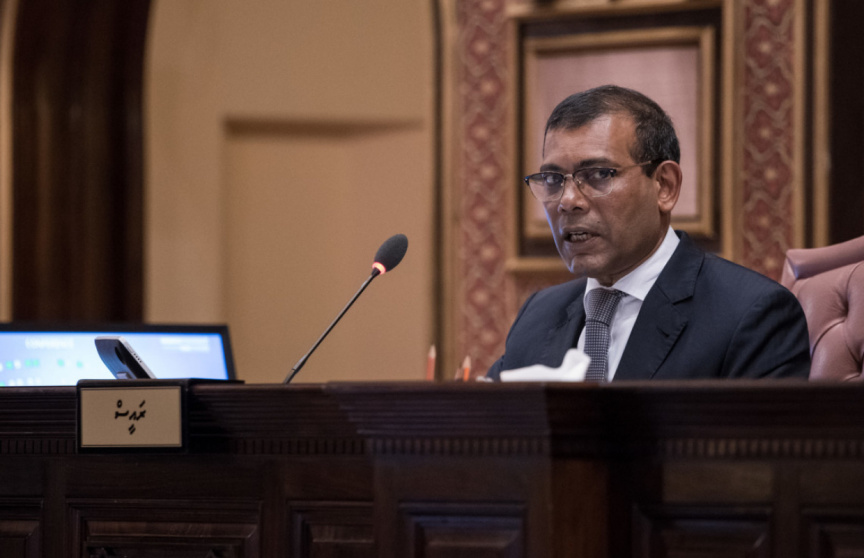 Speaker of Parliament, President Mohamed Nasheed says that he had no doubt Maldives would head towards ruin if failed to stop religious extremist activities in the country.

He made the remark after reading the highlights of the Disappearances and Deaths Commission’s investigative report on the 2012 murder of prominent politician and Islamic scholar Dr. Afrasheem Ali at the parliamentary sitting this Sunday morning.

DDCom’s findings show the murder to have been carried out by a local jihadist group which had been angered by Dr. Afrasheem’s views on several religious topics which did not conform with its own.

Nasheed, after reading out the highlights of the investigative report, called for quick action to stop extremist activities in Maldives.

“I have no doubt in my heart that our Maldives will head towards the path of ruin if we fail to quickly investigate and put a stop to the religious extremist activities being run in Maldives,” said Nasheed.

He called for the police, the Prosecutor General’s Office and other relevant state authorities to take necessary action in response to the DDCom’s findings.

Dr. Afrasheem was murdered in the early hours of October 2, 2012 at the stairwell of his residence just as he returned home after appearing on a TV show.

DDCom’s findings show a jihadist group run by Mohamed Mazeed (Dhafthar 471) and Samith Mohamed (Athireege, Th. Omadhoo) to be responsible for Dr. Afrasheem’s murder – the same two people who were named as the leaders of the group which the commission found responsible for the abduction and murder of journalist Ahmed Rilwan Abdulla, which took place two years later, on August 8, 2014.

DDCom’s findings show links between extremist groups with violent crimes in Maldives – including the bombing of Sultan’s Park in 2007.