Change of scene: Ghassan accompanied by Farish to Police 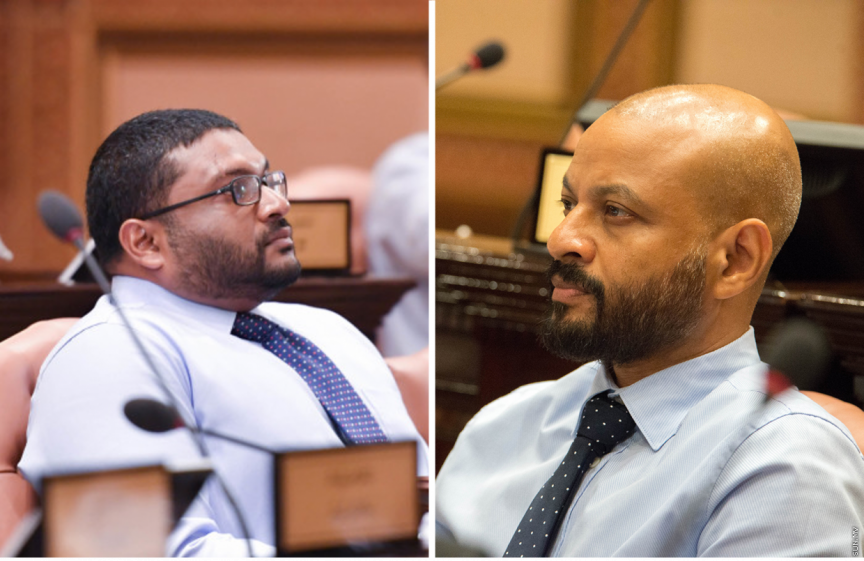 Farish Maumoon (R) and Ghassan Maumoon (L). Ghassan was accompanied by his brother Farish to Police after the former was summoned for questioning regarding the MMPRC scandal on October 28, 2019. The brothers had a somewhat public split after a difference in political views that saw Ghassan side with uncle and former President Yameen, while Farish remained with his father and former President Maumoon Abdul Gayoom. (File Photo/Parliament)

Guraidhoo MP Ghassan Maumoon was accompanied by his brother Farish Maumoon when he was summoned to the Police regarding the MMPRC scandal last night. A picture not seen recently of the two brothers who have a famous difference of opinion in politics was renewed last night as Faarish waited patiently for his brother at the Police headquarters last night.

However, that picture of the split between the two brothers was shifted as Faarish accompanied his brother Ghassan to the Police last night and remained by his side when Ghassan spoke with reporters afterward.

Ghassan has previously rejected claims that ties between him and his well-known family had soured due to the political upheaval. No word has been available from Ghassan or Faarish regarding their apparant reunion last night so far.

Opposition PPM to which Ghassan belongs defended him and described the summons by Police as a political stunt to deviate and distract from the controversial MDN report.

“I met with Ghassan and he told me that this was to deviate and distract from the MDN issue.” Naifaru MP and Vice President of PPM Ahmed Shiyam commented last night. However, Shiyam admitted that he was not aware of the line of questioning taken by Police during the interview with Ghassan.

“Sun” has learned that Ghassan was summoned for questioning in the MVR 3.3 billion scandals of MMPRC currently under investigation by State Asset Recovery Commission, Anti-Corruption Commission, and Police. There are unanswered allegations that Ghassan also received payments from the scandal. Police divulged that more than 200 individuals received payments from one of the biggest scandals in the history of the country.

Police also stated that 16 current MPs and 44 former MPs received payments from the scandal and seven current government officials and 30 former officials were also implicated in a news conference on Thursday.

Ali Hussain to the police in bid to clear his name