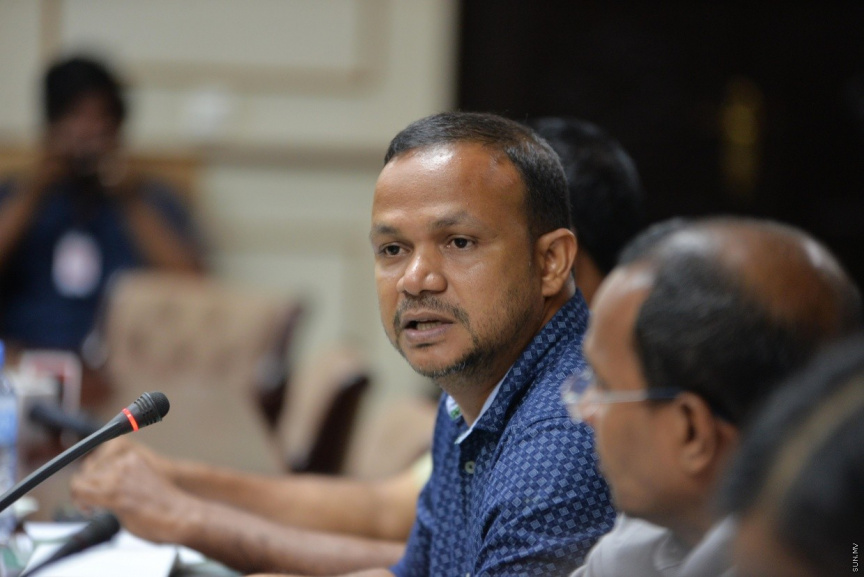 Kendhoo MP Ali Hussain has volunteered information to the police after being named on the list of possible recipients of funds embezzled from Maldives Marketing and Public Relations Corporation (MMPRC).

Ali Hussain told Sun this Tuesday that the money he received from former Vice President Ahmed Adeeb Abdul Gafoor – one of the prime suspects in the embezzlement case – was payment for a legitimate service.

He said that his name should not be on the list, and that he voluntarily went to the police headquarters on Sunday night to clarify the issue to investigators.

“The money was something I received as payment for a clearly legitimate and regulated service. My name should not be there,” said Ali Hussain.

Ali Hussain, who in addition to being a parliamentarian is also a certified lawyer, said that he had rendered legal services to Adeeb prior to his election to the Parliament.

Ali Hussain said that Adeeb had multiple payments owed to him for his legal services during the days leading up to the parliamentary election in 2014. And that Adeeb, at his pressing, made two payments amounting to roughly MVR 500,000.

He said that the MVR 500,000 covered only part of what Adeeb owed him for his services.

“The payment was made in early 2014. I wasn’t a parliamentarian then. I wasn’t in any state position. I wasn’t a government minister. I was working as a lawyer,” said Ali Hussain.

He said that if his name should be included on the list, then others who had been paid for legitimate services by Adeeb should also be on the list based on the same principle.

The police, ACC, and the Presidential Commission on Corruption and Asset Recovery, in a joint-press conference last week, announced that seven officials from the current administration, 16 representatives of the current parliamentary assembly, and six sitting judges have been identified as possible recipients of embezzled funds.

Possible additional recipients include; 44 representatives of the 18th parliamentary assembly, five commissioners of independent institutions at the time, and 23 officials from the previous administration.

No need to pay political parties while country in debt