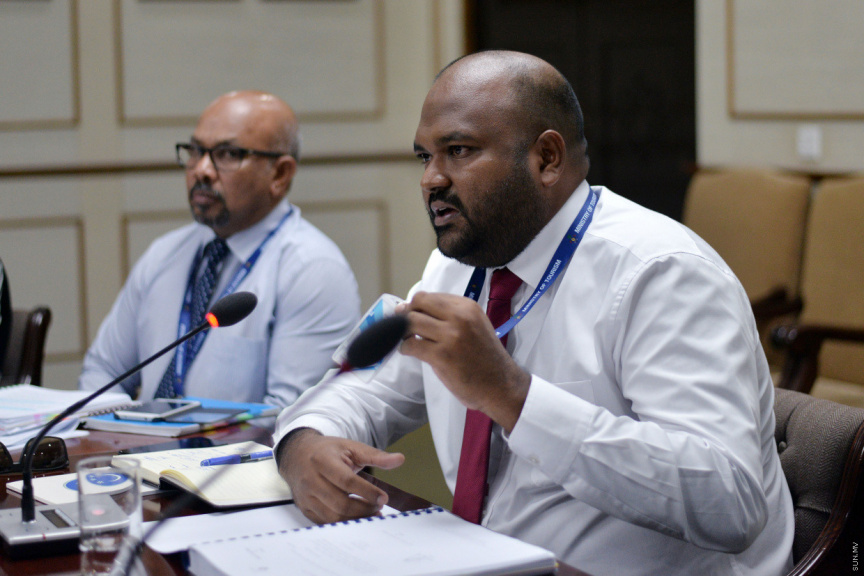 The Minister speaking at the Public Accounts Committee of the Parliament. (Sun Photo/Fayaz Moosa)

Tourism Minister Ali Waheed has said that some valid agreements were terminated by previous administrations to “harm” a specific party.

The Minister was speaking today at the Public Accounts Committee of the Parliament which is currently in the process of forming policies on payments made by the state for damages when he stated so.

The Minister then said that the government was forced to make payments to private companies due to unlawfully terminated agreements by the previous administration.

Some agreements were terminated to harm a specific party or for personal reasons as well, according to the Minister who refrained from divulging any further details of such agreements.

The state also failed to take into account the recommendations and advise of the Attorney General when these agreements were terminated, according to the Minister.

“The agreement for Hankede was terminated by the state with the legal advice of the AG. The Issue was taken to court as well, which was eventually rejected. The AG would have informed whether this move to terminate the agreement was a lawful one or not.” Said the Minister.

It had also been noticed that some resorts were given a weeks’ notice for closure by some Ministers, according to the Tourism Minister. He also noted that some agreements were terminated due to a lack of progress made on long term tourism development projects.

“They (Government) did not check whether work was being carried out on locations leased for development even after the time frame for the project had lapsed. This is how things have been for the last 10-12 years. This will be changed.” Said the Minister.

Challenges posed by courts and some laws were also noted by the Minister in cases of terminated agreements who called for legislation that eases the pressure on investors and the state to be formed.

It is estimated that the state has to pay around MVR 6.8 billion due to unlawfully terminated agreements by the previous administration. There are still several such cases in the court process.